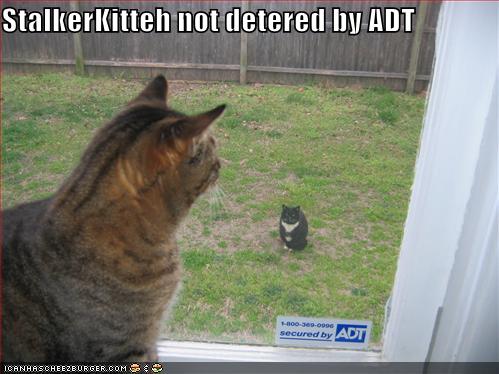 I actually got a big kick out of saying to my friend BC during the mid-stages of the move, "I have a stalker!" It was kind of fun, certainly a boost to my ego. Our mutual friend W___ once had a stalker, and now I had one of my very own.
Now the story can be told, because I have fallen from favor.
It began when a Facebook friend, a former co-worker, sent me a message saying something along the lines of, "Will you 'friend' my friend J____ if I set it up? She's been reading your posts on my page and thinks you're fantabulous."
I had to wonder how anybody could find me fantabulous based on the pathetic and self-absorbed writings that I post here, and I wondered about that, but I was too flattered to say no.
On January 6, the day that the movers failed to show up for their scheduled appointment, she posted "nice to meet you" on my Facebook page, although of course, "meet" is kind of an oxymoron under the circumstances. That same day she sent a longish personal message through Facebook that read, in part:
"I have read your blogs just up to Christmas, barely getting a glimpse into the most recent events of a total stranger that, dare I say, could be my tortured soul mate.
"I'll read more later, but I want you to know that your words strike a cord with me. I've gathered but fragments from infinity but they are enough for me to know that we have shared some similar life events at least at some point."
This sent up a couple of red flags. The purple prose, the misspelling of "chord," the whole "soul mate" thing. But again, I was flattered and allowed that to override the concerns. I'm as interested in possibilities as anyone.

I looked at her profile, but it was hard to get a handle on her. There was little personal information there, and she seemed to be using pictures of totally different women for her changing profile shots.
Soon the hits on my blog went through the roof as J_____ began to read backwards through the whole thing. I figured she must be a glutton for punishment. On January 7 we had this exchange:
J: I am up to mid-October!
Me: You have my deepest sympathy.
J: No! It's great. It's tormenting yes, but I love your heartfelt expressions and passion, even though its dark.


OK. I decided that misery loves company. Following my post about the Miss Bianca books by Margery Sharp, I got this from her:


Me: What self-respecting, red-blooded mouse wouldn't?


J: A female one. She would be jealous.


This was the biggest red flag so far, but I didn't have time to consider it. That very same day, she sent me another personal message:


uh, jeez... um, normally I am shy, well OK, always at first but I am forcing myself (cause I am driving myself crazy by not doing it) to say that I like you and ask if you maybe, possibly, would you consider, perhaps meeting me for coffee or alcohol or something, sometime?

My answer to her was, "Sure, when things calm down. I want to get the move done and the house somewhat in order before moving on down the road!"

My original friend, the co-worker who referred J___ to me, didn't help matters by throwing gas on the fire. One day, J___ posted on my page: "Good Morning."

And the other woman replied: "Why do you post this on his Facebook page when you could just roll over in bed and tell him in person?"

Soon after this, J___ started a blog of her own, and went on Facebook begging all of her friends to follow it. I did so, because I wanted to know more about her. After a few weeks of posts, it became evident that this was no "soul mate" of mine. I quietly decided to just not follow through on the whole "meeting for coffee" thing.

On January 27 she sent another personal message with the header "Hi" asking, on the surface, if I had settled in yet. Of course what she was really asking was whether or not I was ready for that date.

At that time I was up to my eyeballs in the move, and she should have known it, as a regular reader of this blog. But, increasingly, her reality was taking precedence over the reality of her professed "soul mate."

But when I blogged about it, the shit with my stalker friend really hit the fan!

Her response to the post was, all lower case, "sucks when you get up the nerve to ask someone out and they shoot you down, doesn't it?"

This was clearly not an innocent comment, but a shot across the bow. I didn't want to get into a big public Facebook argument, so I simply replied: "Eh. It's all good."

And got this response:

I wanted to tell her where to get off, but suddenly found that I couldn't. She had un-friended me! I could feel the frost through the computer screen!

I went to her blog and typed, approximately, the following. It's not exact, I'm sure:

"You and I both know that I didn't shoot you down. This week was the very first chance I had to do something, and I chose to go out with old friends. I have that right. In response you have a hissy fit on facebook and unfriend me. Behavior like that makes me not want to follow through. Sorry."

The second to last sentence was more than a little bit disingenuous, I admit. I had already not decided to follow through, I was just leaping on this incident to put an end to this once and for all. But the first part of the message came right from the gut.

I don't know this woman from any other person on the street, yet she was acting like she had a claim on me. This was borne out by the reply I got on Facebook, under the header (again all lower case) "sorry we never met":

really Doug, I am. I tried hard to befriend you because I thought we had a lot in common, I think things happen for a reason and I thought maybe we would be better knowing each other than not. I liked you and it was hard for me to take that step- I wasn't having a "hissy fit" about you wanting to date someone else- God knows that is your right, it just sort of hurt my feelings that you blogged about how regrettable it is that you couldn't get with C______ and you never even gave me a chance.

So basically, that kind of behavior doesn't make me want to follow through. Sorry.

It made me angry, but it also made me laugh. Did she not read the post? "Regret" is her word, not mine. I had a great time that night with friends both old and new, and I believe the post makes it clear that I have no regrets whatever associated with C______.

There's a deleted scene on the DVD of Borat: Cultural Learnings of America for Make Benefit Glorious Nation of Kazakhstan. Sacha Baron Cohen, in character as Borat, hires a masseuse, a guy, and then tries to get comedy out of the situation. Late in the massage, he rolls over onto his back and, under the towel, it's revealed that Borat has sustained an erection. Borat pleads with the masseuse to finish him off. "You got this to happen, now you finish!"

The poor man keeps on working methodically on Cohen's leg, and says, "I didn't do that to you. You did that to you."

I realized that, all along, it was danged silly to be flattered by the attentions of this person. Her interest in me didn't have anything to do with me. It was all in her head.

My hands are not clean in this regard. I've done that to women in my day, including one of the women I had dinner with the other night, so I guess it's just payback to have it happen to me. One-sided interest is a bad deal for everyone involved.

I hope J___ finds her soulmate, but I'm danged glad it's not me.

Email ThisBlogThis!Share to TwitterShare to FacebookShare to Pinterest
Labels: conduct, starting over