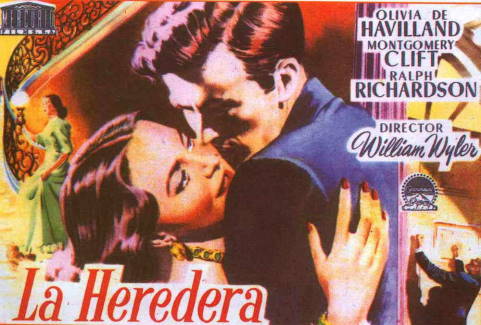 I can't say that it held my attention during its somewhat tedious first half-hour (the party scene is almost expertly tiresome, as these affairs usually are in real life), although that may have been my fault: I was loading the dishwasher and pulling things into the house while its early scenes played out. But at a certain point the sparks begin to fly in 1949's The Heiress, and I was compelled to sit down and pay attention.

Ultimately, The Heiress is an ugly movie, really an exercise in ugliness, with the very beautiful Olivia de Havilland surprisingly credible as a Plain Jane rich girl who is emotionally abused by everyone around her, most especially by her casually disdainful father, played by Ralph Richardson at the height of his very considerable powers.

The costumers, make-up and hair people go out of their way to uglify Miss de Havilland and fail miserably: it is de Havilland herself who sells it, with her posture and the angle of her head and arms, and the telltale gleam in her eye of someone who is self-consciously awkward. She richly deserves the Academy Award that she won for this picture, but it raises questions about what makes for a juicy part and why someone of Miss de Havilland's charms would pursue a role like this and embrace it so closely.

That the Richardson character is bang-on right about the motivations behind Montgomery Clift's pursuit of his daughter doesn't make him any more endearing. He may actually believe that he's protecting his daughter, but his "protection" seems to have created the problem in the first place; now that I type it, this may actually be the point of casting such a lovely woman as de Havilland and then Mouse-ifying her to the max. There's no reason for her to be ugly, other than that she seems to have been told that she's ugly all of her life.

This certainly is not the sort of thing I've come to expect from Bill Wyler, other than that it's handled with all of the usual skill that he brings to bear. But still I have to ask, "In the service of what?" As the end title fades in over Clift's hammering realization that he's been had by an expert, an expert that he helped to create, we're left feeling just as used as the sad, pathetic characters in the movie.

Still, I'm glad to have seen it, a picture that I never heard of and probably wouldn't have bothered to track down. TCM is a great, great thing, I must say, although it's keeping me away from my queue of DVDs.