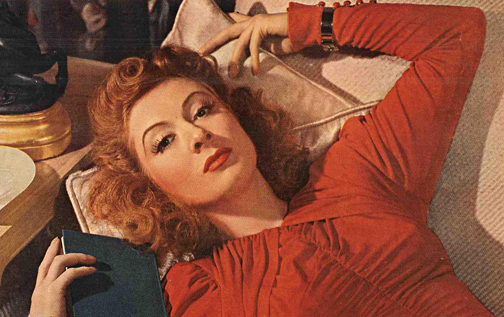 I have a confession to make.

I fawn in her General Direction.

She is the Quat's Meow.

If I could get my hands on a Time Machine, my first stop would be Greer.

From the time I was just a kid and heard her narration for the Rankin-Bass Christmas special The Little Drummer Boy, I knew that a woman with a voice like that was special. When I finally had a chance to see Mrs. Miniver, that was it, baby.

The last thing that I wanted to do the other night was get involved in another TCM marathon showing of two or more pictures, but there at eight o'clock was Blossoms in the Dust, starring G*R*E*E*R G*A*R*S*O*N in Living Color, and I just flopped in my easychair and melted into a puddle of Adoring Mush.

It was a fine picture, too. If half of what happens to the fictional Edna Gladney actually happened to the real-life one, then her resilience is remarkable. The loss of her adopted sister (this is why guns should be illegal: as shown in the picture, this was a totally preventable death by suicide), her son, and her husband appears only to have tempered her and focused her more powerfully on her mission. But then, this is Hollywood. Without researching the true story, the events in Blossoms in the Dust need to be taken with a grain of Hollywood salt. (I did quickly Google Edna. She certainly looks nothing like Greer Garson and I bet she didn't sound like her, either!)

Hokum it may be, but it's effective and powerful hokum to this day. Even such a child-hating misanthrope as myself couldn't help but be repulsed by the kind of villainy that Greer tilts at in this picture. Her climactic speech from the Texas Senate gallery is the stuff of great movies.

Did I mention that I worship at the altar of Greer Garson? *sigh*

Fortunately, the next picture in the line-up was Mrs. Miniver, which I have on DVD (two copies, just in case!) -- so I felt no obligation to stay and impale myself on another two hours of Greer. That was good -- I was able to get some unpacking done. But by bedtime, Greer was still doing her Wartime Thing, and you can bet I turned the set on in my bedroom. But rest easy, there was no hanky-panky. I couldn't get that pesky Walter Pidgeon to leave us alone!

My mother was fortunate to have seen Mrs. Miniver on the big screen in its original release.  She often told of how she and her girlfriend Joan-Betty would take the bus on Saturdays to go to the movies, and Mrs. Miniver was one of the pictures that she loved the most (the other was How Green Was My Valley). When I got the DVD and ran the picture for her again, it was the first time she'd seen it since the original release. As the credits began to roll, I asked, "Well, was it as good as you remembered?" And I heard, *snff* *snff* *snuffle* *sob* "Y-yes!"


*
In other news: with any luck, this will be my last daytime post from work. I look forward to being a better employee, and to writing, finally writing in my own study, on my own computer.
I took the whole day off yesterday to wait for the service appointment that would re-connect the phone lines that had been disconnected by Time Warner sometime in past years, and they never showed up. I was so frosted that I threw an extra drink inside of myself while dinner cooked, just to help me calm down to a level where I wasn't scaring the cats with my rants. This made me angrier, because it made me angry at myself. I drove into work around 7:30 so that I could shoot them off a really outraged email. Flame? Oh, yes. This has gone on long enough.
I don't know whether or not it worked, but this morning at 9:30 I looked up from my breakfast and there was a truck in my driveway.
It made me late for work, but I now have phone service. Tonight I plan to stay away from the telly entirely and see if I can get the internet up and running on the new computer. If I'm successful, I'll let you know!
-- Freder.
Posted by Freder at 11:50 AM