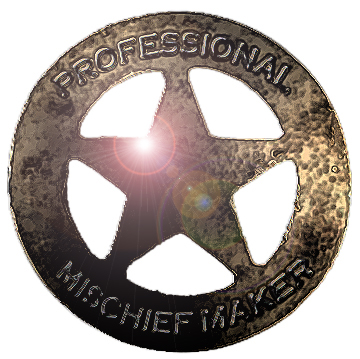 I accomplished so many goals this weekend that I deserve a gold star!

I also learned that it's pointless to clean around boxes, because the minute you get those boxes out of the way, the floor is dirty again.

My house is notably less strewn with boxes than it was going into the weekend. Mind you, there are still boxes. But places that were barely navigable are navigable again. Progress is being made. Of course, sometimes this involves taking certain things out of one box and putting them into another, or just throwing them on a dresser or a bed, kicking those decisions down the road; but the overall trend is in the right direction!

I found the nuts and bolts for my drawing table and last night, until well after one AM, I reassembled the bloody thing. And re-assembled it, and re-assembled it. I kept getting parts backwards. This is not because I was hitting the bottle too heavily. But it had been y'know, more than three months since I took it apart, and the design is almost counter-intuitive, I had the base pointing in the wrong direction to start with, and that had a ripple effect through the whole process. The first time I put it together it would have worked great -- if I had wanted to draw lying on the floor! The second time it faced backwards and would have required the artist to become a contortionist.

I can have a salty tongue, and as this went on you would swear (the operative word being swear) that I had opened a fresh canister of Morton's Iodized and dumped it into my mouth. By the last round I wasn't even attempting to string the cuss words into a coherent sentence, it was just Verb, Verb, Verb, Adjective, Verb, Noun, Noun, Noun.

But I got the damn thing together -- and suddenly, my notions for the room were pulled into focus. I stood in the doorway and admired the view. It didn't matter that there were still boxes and things all anyhow. I had a drawing table and a chair in front of it, an art cabinet at its side with a light on it, suddenly the room said  "Studio." It's the sunniest room in the house. It has shelving and storage and I even found my scrapbook and laid it open across the table.

I worked a little in the Halloween room, got that bed made, got some things placed, it's looking good, too. The back bedroom is still another matter, I've done nothing in there.

I hung a lot of things downstairs, refining the design of three rooms, and decided where to hang some of the rest.

I found several things that were missing. There are still some items that have gone AWOL, but finding what I did makes me hopeful that the rest will turn up.

I scored some vacuum cleaner bags, so I'll be able to do that when the time is right! And I redeemed almost four months worth of bottles.

(Sometimes when I do that, I think back on the year when I was conducting a long-distance relationship with a mostly great gal from Virginia. It lasted about five minutes, but while it was on she made one trip up here to New England, and one day we were driving down the road and passed a bottle redemption place. She saw the sign that said REDEMPTION, and where she came from, redemption meant only one thing! I had to explain to her that no, the people in that house weren't snake-handling or speaking in tongues.)

And I hied me over to one of those Big Box Home Improvement stores and ordered me up a clothes washer and dryer.

I'd like to know how they found out my name and address and the fact that I'd just moved into a new home. But find out they did, and almost one of the first pieces of mail that I got here was a ten percent off coupon on any purchase up to $2,000. I knew that would come in handy, and kept it in a safe place.

Nonetheless, when the time to use it came around, I forgot to bring it with me and had to run back home for it.

The good news is, home was five, instead of twenty-five, minutes away.

I spent too much time looking at all the different models. The front-end loaders looked so cool that I was tempted to go that way. But for about half the price (with the help of the coupon), I has able to get a high-capacity, low-energy, low-water, high-efficiancy washer and dryer, and get out of it for under nine hundred smackers.

My credit card definitely thinks I made the right choice.

After this weekend, I begin to look at my life and the place I am at and compare it with my life the way it was six to nine months ago, and the difference is stark.

I still have flashes of sadness, but it's not the same.

From mid-May until the chaos and stress of the move overpowered it (and sometimes even then), I was, I think almost literally, a prisoner of my grief.

As the new house began to take shape, the sense of newness unfolding fell into place beside the grief. The two emotions are growing together. The one takes the hard edge off the other, and the other reminds me that this particular hit of the restart button came at a horrible cost, and that to fail to take full advantage of it would dishonor my mother's memory in the worst way.

I was going to add a soundtrack here, to share with you what I was listening to this weekend, and to reward your attention for wading through all this drivel, but Fairpoint is rearing its ugly head, the interwebs are not cooperating, and I'm unable to upload the file. Tomorrow, for sure!