The most accurate Movie Line in History: "I Don't Give a Damn." 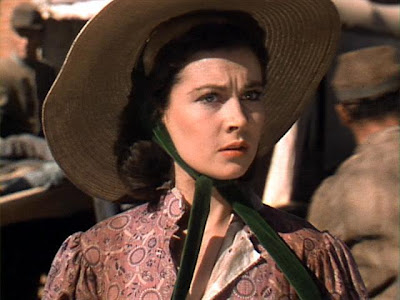 I've been grateful that TCM, for the last few nights, has been running things that I've already seen or actually own on DVD. It's freed up my time for other pursuits. I'm almost equally as glad that, even as I type this, they are running Gone With The Wind -- a movie that I don't own on DVD, never will, and frankly have never been able to sit through even once.

The problem is simply this: Margaret Mitchell.

Gone With The Wind is one of the worst novels ever written in the English language -- at least, among the ones that take themselves seriously.

Scarlett O'Hara is touted as a Survivor when she's really just a Bitch, Rhett Butler is a scoundrel, and for some reason we are expected to respect him for that. Ashley Wilkes is such a wimpy-boy that he makes me look like Ahnohld SchVARZenegger.

There isn't one single likable character in the novel, and in the movie the actors dutifully portray the characters in all their deep unlikable-ness. The book was one of the most detestable reading experiences of my life, and the movie only accentuates Margaret Mitchell's stupidity and ignorance of the form.

The one thing that the story has going for it is the deep hardship of the Civil War, and its message that somehow, someway, people manage to muddle through the most difficult and horrendous of circumstances. Had it not been for the last ten months of my life, I would not even have been willing to acknowledge that much.

The issue I have is that I just don't care if any of these woefully misbegotten characters survive or not. Every single one of them is, in their own way, contemptible and detestable. How can a writer possibly, successfully convey a message of the virtues or survival when all of the creatures she writes about woud be better stamped from existence?

Scarlett and Rhett belong in one of the Darwin Awards books. They should have done the gene pool a favor by NOT surviving the war!
Posted by Freder at 12:43 AM