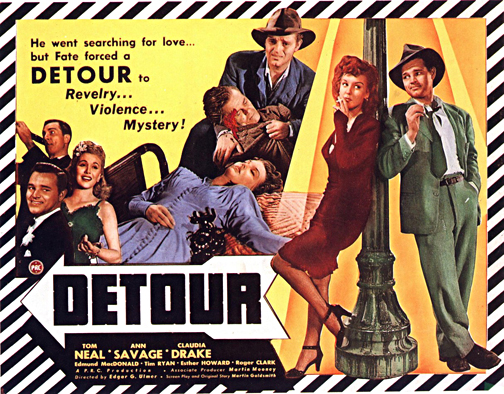 I've been hearing about Detour for years and I had my doubts. Now that I've seen it, I have to say that it is well-made for such a low-budget picture, and it does hold your attention -- but nonetheless, my doubts were well-founded.

The problem with so much of the noir genre is that it relies on the characters making one stupid decision after another, until they've positioned themselves in a sinkhole from which there is no escape. It's hard to feel any sympathy for such a pack of self-destructive boneheads. . . and the central bonehead in Detour, Tom Neal, is no exception. He certainly starts out by asking the wrong question: "Who'd believe me?" The answer is, it doesn't matter. If you run from the truth, you look even more guilty.

And what kind of a moron plays tug of war with a telephone cable under a door? What did he think he was going to accomplish with that one? Really, Ann Savage's demise is one of the dopier accidental deaths in the genre! Not that you mind -- she's such a pill in the movie, and the Neal character caves in to her belligerence at every turn, presumably to show his innocence.

The novels of Jim Thompson rub me the same way. They generate a sense of futility and hopelessness that, in the words of Mark Twain, arrives nowhere and accomplishes nothing. Now that I think of it, these examples of the genre probably violate about 90% of Twain's rules for fiction writing. Not familiar with Twain's Rules? Oh, my goodness, every writer (and reader) should be acquainted with them. Just click here.

And I'll see you down the road a piece. My mood has improved since this morning, because some solutions to my problems are coming into focus. See, that's what you do: don't be Tom Neale and stand there like a fool and let that oncoming train mash you down flatter than a pancake. Take shank's mare and get out of the way!