More than one loose screw. . . 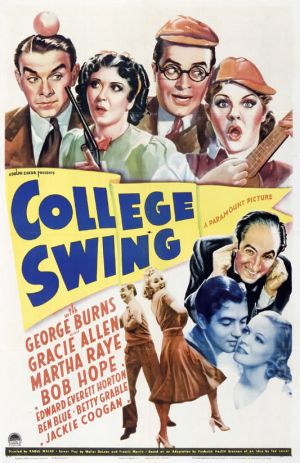 I must say that College Swing (Paramount, 1938) is just about the goofiest picture I've ever seen -- and not in a good way!

For one thing, the student body is kind of elderly, with Gracie Allen leading the pack as a gal who just can't graduate. The question is, dumb as she's portrayed here, how did she get in to college in the first place? Bob Hope is on hand to see to it that she gets her diploma one way or another, and when this actually happens (in a ridiculous fluke), Gracie immediately takes over the college -- go figure -- and appoints herself dean of men.

After hiring a string of the un-funniest "comic" professors you never want to see (who ever thought that Ben Blue was even remotely amusing?) she meets Edward Everett Horton, marries him, and turns the college back over to its former masters.

That's it. That's the whole movie. Throw in a few enthusiastic but minor musical numbers, a cursory romantic subplot, and vamp till ready, baby.

George Burns gets top billing, yet he's barely in the movie at all -- and without any significant scenes with Gracie!

And then there's Martha Raye. I can take her in very small doses -- this is too much, although she does get the best scene: a musical number with Bob Hope in which the two finally succeed in breaking each other up on camera -- the only genuine laugh or charm in the whole movie!

This came as a double feature with The Big Broadcast of 1938. As an "extra feature" I guess it's worth a watch. It's certainly the only way that Universal could ever sell this thing on DVD! Brrrr! I call it proof positive that braindead comedy didn't just begin in the 1980s!