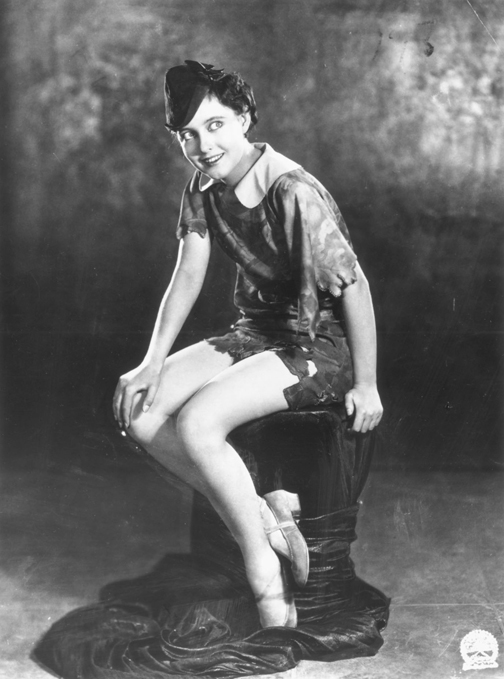 My current run of Peter Pan pictures would not have been complete without revisiting Paramount's 1924 silent version starring Betty Bronson as the boy who won't grow up. Bronson's principle qualifications for playing Peter seem to be that she has a good silent-movie kind of face and is utterly flat-chested. . . but in all other ways she's about as convincing a boy a Betty Grable would have been.

Her performance is as broad as any you'll see in a silent movie, full of posturing, posing and, worst of all, prancing about and flapping her arms. This latter especially invites some very un-PC Humorous Thoughts to float through my mind.

She also has a habit of flashing her eyes wildly, which at times makes Peter seem more like a deranged serial killer than a Lost Boy. And yet, J. M. Barrie was still alive when this movie was made, and Bronson apparently came with his glowing recommendation.

The picture is in most ways true to the play, although two different actors are used for Mr. Darling and Captain Hook, and there's a sudden and bizarre Americanization that takes place in the final act. The whole affair is made uncomfortable by such a ladylike Pan and a Wendy (Mary Brian) who is much too old for the part -- probably necessitated by Wendy having to appear slightly older than a grown-up woman!

Paramount spent some money on this in the form of a real pirate ship anchored off the California coast. Neverland (here referred to, most annoyingly, as "The Never Never Land") looks just great, and so do the Lost Boys in their fake fur jammies. There are some bathing-beauty mermaids, and all the pantomime animals are amusing in the best sense. In her few close-up shots, Tinker Bell is realized quite well in a long, flowing gown that appears always to be the center of  a windstorm.

But the award for best performance has to go, hands down, to George Ali as Nana, the dog! For me, this is the most fun part of the movie, as it's the closest we will ever come to seeing the original stage production of Peter Pan. As thankless a job as playing Nana must have been, Ali knows how to move and manipulate the costume to great effect.

When all is said and done, it's not a bad interpretation. . . but it is a pretty easy one to fall asleep on.