Tired of Nincom-cats. . . and just about everything else, really 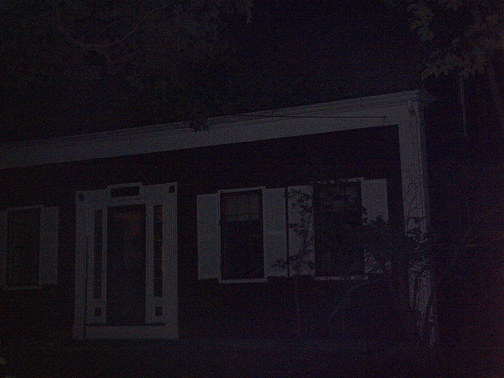 I ended up not going out to the old house last night. It was raining too hard, and windy, and I didn't want to load and unload the car in those conditions. That was my excuse. The real reason was that I just simply needed a night off after something like ten straight days of moving; I was exhausted, aching, and my emotions were out of control after closing on the place yesterday afternoon.

Now I regret not going -- the rain has turned to snow, and if the snow doesn't stop it will make a trip out to the old place untenable, and that's not getting anything done.

But it was a lovely, peaceful evening. I played with the quats, watched an episode of UFO, made and ate a pizza (Hamburger, mushrooms, bacon and broccoli. . . must remember to give it a couple more minutes in the oven next time) and thanks to the shelving I brought over on Monday I was able to unpack and shelve six big boxes of books. I will need those boxes, going on.

It doesn't help that Tiger Whitestockings has been behaving like a ninny. For three days she hid under the Corvette that the previous owner of my house is storing in a bay of the garage, actually cowering on top of the far front wheel, not even coming out to notice that I left the garage door ajar for her. I literally had to drag her out and carry her across to the food, and kneel over her and pet her before she would eat anything. If I so much as stood up, voooom! She shot back under the car.

This morning I got pretty fed up with this bullshit, and carried her outside. I set her down with the heaping plate of food on the deck, under cover. But she freaked out all over again, and slinked away, finally taking shelter from the snow under the deck. That's probably as good a place for her as any. There's a gate that I  can put her food through. I left the garage door ajar for her again. We'll see how it develops from here, but I am honestly starting not to care. I've done everything I can.

The same goes for Tiger Grumpyface. I tried and tried to get my hands on her this past Saturday, and she ended up swiping at me with her claws. I finally decided, "Fine, if that's the way you want it." When I went back Sunday morning, there was no sign of her. When I went back Monday night, there was no sign of her. I didn't leave any food out; no point in just feeding the damn raccoons. She made her choice. I have enough to deal with.

Honey is still not sleeping with me. This morning before eight, I found her curled up against the wall outside my room, and grabbed her. She must have been sleepy enough not to care, because she stayed with me and for ten minutes we had a good snuggle. Then I made the mistake of petting her and thanking her for staying, and that must have woken her up enough to realize where she was. She ran away.

So I'm pretty angry with her, too. I give her turkey and everything, and she's not doing her job!
Posted by Freder at 12:23 PM