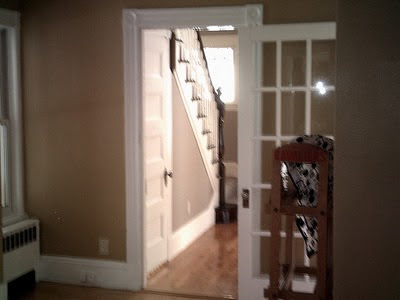 Last week around Wednesday I spoke to the soon-to-be ex-owner of what will become the All-New, All-Different DuckHaus. He told me that I could start moving in.

On Saturday another old friend, H______, came by with his wife E________ to pick up the six big bags of VHS tapes that I duped to DVD during the summer months. As a result of the earlier phone call, I was able to say to them, "D'you want to be the first ones to see the new house?"

We threw some boxes quickly into the back seat of my car and scooted in to town.

We were standing on the front lawn near the FOR SALE BY OWNER sign when D___, the owner, drove by and hollered at us out the window of his car, "You can take that sign down if you like!" -- which we did.

He let us in, showed how a few things worked, then left us -- not before giving me the keys to the back door. They are now on my key rings.

H______ and  E_______ got the grand tour, we visited a little and then they had to leave. I was all alone in the new house. I unloaded my boxes, stowed them in the small attic, puttered around a bit, sizing the place up, put the FOR SALE sign in the garage. By then it was getting dark and starting to snow, so I locked up and hit the road.

It struck me on getting home that Home still feels like Home and the new place of course does not. Sometimes I still wonder if I'm doing the right thing.

The next day I got some big pieces out of the workshop and into the barn, so that I will still still be able to access them if the side door gets snowed in. I filled up the car with boxes of books, and on Monday through a blinding snowstorm I somehow got to town and moved that lot into the house. But it was just boxes. It did nothing to make the place begin to feel like it was mine. I needed to start Marking the place, just like a cat.

So today I brought over some of my mother's paintings and some other minor iconic items. Just that little bit made a wonderful difference. I will do the same tomorrow.

Moving is one hell of a roller-coaster ride. The part about moving in is exciting and interesting; but packing -- tearing apart the old house where absolutely everything has a memory attached -- that's another thing entirely. It used to be such a nice place. Now I'm reducing it to a pit again.

The snow hasn't helped. I'm drinking too much at night. It's the only way I can get up enough courage to load the car.