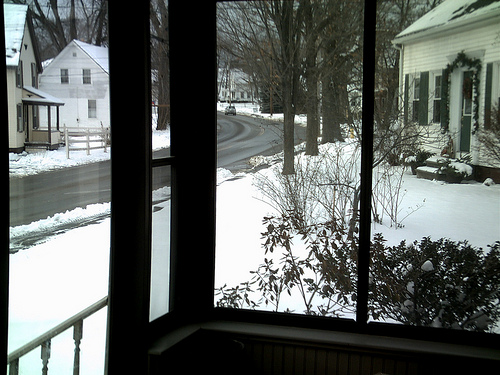 It is the day before Opening Night, and like all producers I am concerned for the success of the show.

Last night I pulled up the big rugs in the living room and dining room of the Old House, rolled them up and loaded 'em. I had the notion that the rugs would be a fairly big deal to the cats, something they would instantly recognize when they get to the new diggs. I must have been right, because when Honey came downstairs this morning she completely freaked out! I haven't seen her so upset since the first day that the auctioneers came to raid the place, and I've never heard her yowl like that. Of course, it probably didn't help that there was a strange man in the house. She ran and hid, and when she reappeared I couldn't pet her or hug her enough.

The strange man was from the moving company. If I was doing this right I'd probably get more than one estimate -- but just now I'm inclined to take the path of Least Resistance, providing the number he gives me isn't completely outrageous.

Yesterday I talked to the estate lawyer and learned some interesting things. The Wolf is at it again: she's been appearing in the lawyer's office every other day, hounding them for money. She wants $15,000, and she wants it yesterday. The estate doesn't even have that kind of money at the moment. Everything is still pending, though we close on my mother's house this coming Tuesday. I reminded the lawyer that at some point we have to remember to dock my sister for the $2,000 that she already has swindled from the estate, and come up with a number for the other things that she stole.

Sue C_______, the paralegal who works with my lawyer, had been in contact with the auction house. The first auction, of the least valuable pieces in my mother's collection, apparently brought in somewhere around $45,000. The lawyer was thrilled with that. I don't know how I feel. When I heard the number I didn't feel either happiness or disappointment. I felt completely empty. It saddens me to reduce my mother's life to numbers.

In the "more than enough Misery to go around" department, Sue and her husband H______ lost their house to a fire recently. I'm told that there wasn't much in the way of flame, but the smoke destroyed everything inside.

I'm reminded of a postcard I used to have. I used to think it was funny. It was a cartoon of a man poking his head out of a foxhole. He was surrounded by total thermo-nuclear devastation, a desolate landscape of craters and debris. He had one black eye, bruises all over him, and half of his teeth knocked out. But he had a huge grin on his face, and he was holding up a sign that read:

Email ThisBlogThis!Share to TwitterShare to FacebookShare to Pinterest
Labels: quats, regret, starting over, the wolf