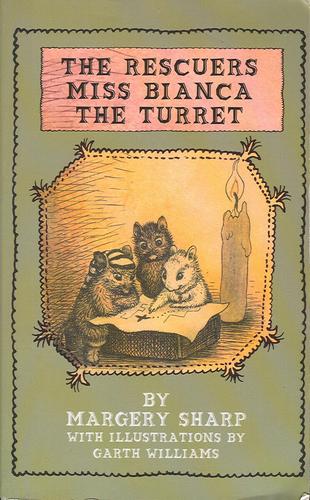 I don't want to write about moving today, although it is much on my mind, a weight that never seems to get any lighter.

Instead I will write about Miss Bianca and Bernard the Brave. Not the Disneyfied version of the movies (although the first one was okay despite its departures), but the source material, the original books by British author Margery Sharp.

Regrettably, the Miss Bianca series is completely out of print. This is a crime. Although I cannot speak for the later books in the series (my family stopped at four for some strange reason, and until later years I never knew that more existed), the first three are among the books that I most fondly remember.

They are Gothic Victorian Romantic Adventure stories -- with mice. When Disney made their version, it was Americanized and transplanted to the Louisiana Bayou, but the books are ornately European and much richer in texture. As illustrated by the great Garth Williams, the books are filled with what Williams himself referred to as "a soft furry love."

But they are also filled with darkness and wonderful villains. In The Rescuers, a young girl is forced into servitude by The Grand Duchess, who with her faithful valet lives in a decaying old mansion attended by clockwork handmaidens.

I have to stop. I may revisit this post later on. I'm not doing it justice. Just too tired. Suffice to say that you should seek out The Rescuers, Miss Bianca and The Turret, and devour them by candlelight at night.
Posted by Freder at 1:27 PM