There are rights and wrongs in art as in life. Here are two wrongs having to do with J.M. Barrie's Peter Pan, before I move on to the rights.

J.M. Barrie gave a remarkable gift. For nearly one hundred years, his royalties from Peter Pan have gone to benefit the Great Ormond Street Hospital for Sick Children in London.

Now that the copyright for Peter Pan has lapsed and the character is in the public domain, the moral right of the Great Ormond Street Hospital is under attack by none other than the Walt Disney Company. In a move that can only be described as a crass attempt to glom the copyright of Peter Pan for themselves, their book publishing arm Hyperion has issued several new novels about the character co-authored by the otherwise respectable Dave Barry and Ridley Pearson.

It seems strange to be working in a bookstore and to ask you all not to read or support a book, but that is exactly what I am doing. By publishing these unauthorized rogue “prequels” to Peter Pan, the Disney Company is literally stealing from sick children. So much for the vaunted “family values” of the suited corporate criminals hiding in the shadow of Mickey Mouse.

In an effort to hang onto their bequest, the Great Ormond Street Hospital has authorized an official sequel of their own, Peter Pan in Scarlet by Geraldine McCaughrean. If you must have new stories featuring Peter Pan, please support (and encourage your children to support) the official novel, which promises to take the Barrie bequest well into the new century.


*
And now, on to the travesty that is Hook. Anti-intellectual, wallowing in stupidity, this shocking rape of J.M. Barrie twists and contorts his play into a contemporary parable about finding one's "Inner Child." Despite Hoffman (who is fine), this is typical Spielberg soft-headed manipulation. Stay away -- stay away!
*
On the other hand, Finding Neverland is more of a right than a wrong. It's merely an incredibly efficient machine for making people cry. The audience I saw it with all blubbered unashamedly. For my part, I am entranced by the movie's portrayal of the original Victorian-era stage production of Peter Pan.
*
But the real reason I'm yammering at you today is to encourage everyone to check out P.J. Hogan's little-known and under-appreciated 2003 version of Peter Pan. This is, by far, the best, most faithful film adaptation of J.M. Barrie's play. Somehow it manages to balance a modern approach and very showy computer work with respect for the source material. A terrific cast all up and down the line is highlighted by Rachel Hurd Wood in her first-ever acting job as Wendy, and Jason Isaacs following in the tradition of the stage play by taking the roles of both Mr. Darling and Captain Jas. Hook, and doing a smashing job at both. The delightful Richard Briers co-stars as Smee, and, in a major milestone that finally allows some of the play's subtext to come to light, Peter himself is at last played by a boy, Jeremy Sumpter. 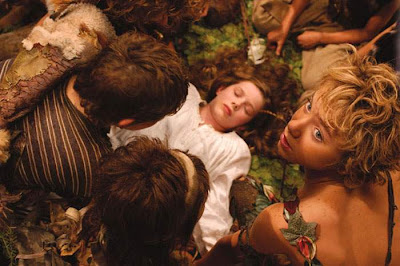 This changes everything, and allows the play to breathe deeply. For the first time, Peter Pan becomes what it really was all along: a Romance. It's made quite clear that Wendy is on the verge of becoming a young woman, and her feelings for Peter are colored by frustration at his refusal to grow up with her. Meanwhile, Isaacs's Hook turns out to be something of an embittered Romantic, a Poe in Pirate Drag whose motivations in hating Peter go far deeper than just the loss of his hand. He's jealous, and choked with regrets so powerfully strong that he actually distills poison from his own tears (this is a detail right out of Barrie). In fact, he is able to manipulate Wendy because he understands her. 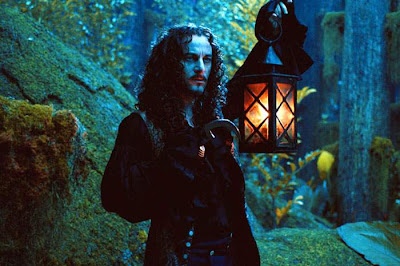 The one real liberty that's taken with the play happens at the end, when Hook discovers the power of flight and the final swordfight between him and Peter takes spectacularly to the air. Happy thoughts, to him, involve murder and lawyers, so, with the requisite dose of Fairy Dust, he soars quite well -- until Peter, in a very nice twist, realizes Hook's dark secret and turns it, fatally, against him.
Posted by Freder at 4:54 PM