Pop Culture blather: just to take my mind off of all the other stuff... 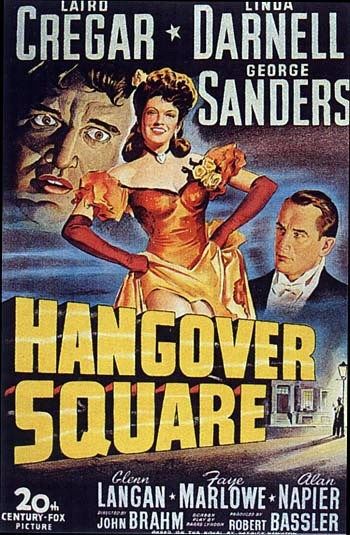 Where have John Brahm and Laird Cregar been all my life? More to the point, with all the old movies I've watched and all the time I've spent reading about them, why have I never heard of these two men before?

With Cregar, at least there's an excuse. He died quite young, not even living to see the release of his final picture, Hangover Square.

But Brahm appears to have had a long and varied career, and if the three films I watched this weekend that bore his name as director are any indication, the man was a true stylist, and a great unsung talent.

First up was The Lodger, Fox's 1944 version of the often-filmed story about Jack the Ripper. You know that you're in the hands of a master from the opening shots, with the camera creeping about London's night streets, following its inhabitants through a variety of tableaux until the first murder happens right under everyone's noses. The papers immediately rush out a new edition and the newsboys carry the word from the slums to the homes of the once-wealthy.

And then Cregar lurches out of the darkness to select his new name from a gaslit street sign. Cregar was a giant of a man, six foot three and three hundred pounds, and his presence is imposing to say the least, even when he's playing mild-mannered. His performance as the Ripper is mesmerizing and covers a wide range of emotional territory. At no time are we in doubt as to his guilt; only his motivations are in doubt, and these seem to be driven by a sweeping Romanticism fixated around his own brother. You get the sense that Cregar is a runaway horse straining to control itself. I won't spoil the final scene, but I will say that Cregar holds it all in his eyes and on his very considerable shoulders.

Sir Cedric Hardwicke is also in the movie, almost unrecognizable under a beard, and Merle Oberon does the blithely seductive thing: she is the meat dangling as bait to draw the Ripper into final confrontation.

The whole picture is so striking that I wonder why it has been so little shown and is so little known.

But wait, the goodness continues. Hangover Square is a virtual second helping. Cregar (who was desperately trying to remake himself in ways that directly led to his death) had slimmed down considerably by this time, and gets to play for more sympathy in this picture, but he is no less imposing in stature and his performance is no less remarkable. This time the killer is a somewhat meek composer who is driving himself so hard that sometimes experiences blackouts -- periods in which he does things that no one ought to do.

Once again, Brahm is directing, and once again the opening sequence contains an exceedingly well-staged and chilling murder. Once again there's no doubt as to the identity of the perpetrator. And once again the "hero" ends in a smashing self-inflicted downfall, this time to the music of the great Bernard Herrmann. It's all so well done that you feel like you're waking from a dark dream when the end title rolls.

And oh, that Linda Darnell!

These three pictures were all brand-new to me, and hands-down the best part of my Halloween weekend. They come in a box set from Fox, and I highly recommend it to anyone who likes, em, this sort of thing.
Posted by Freder at 12:41 PM