Introducing Quats of the Duck House, part one 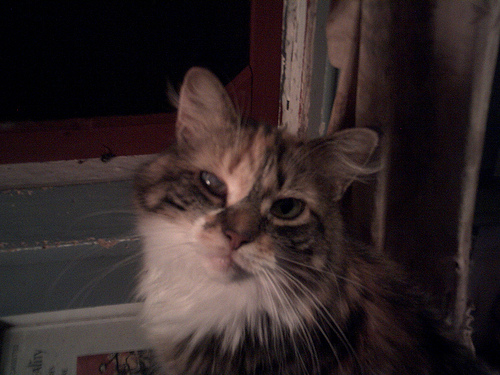 This is my little Honey. I love her so much.

She was a spring kitten born to the outdoor "feral" cats. Early on she contracted a terrible eye infection. Long, long ago, we had decided that caring for the indoor cats was enough, and that the outdoor cats would get food, milk and water -- but beyond that they were on their own.

So this little kitty, who did not even have a name, was condemned to a summer of terrible suffering.

She kept to herself, or was ostracized, and lived all alone under the bushes in front of the house. The eye infection was advanced and a terrible and pathetic thing to behold. I didn't even like to see her. I wanted to take her to the vet to be put out of her misery, but somehow that never happened.

Then, as summer drew along to an end, her eye infection began to heal. In a relatively short time for something so horrible, it cleared up entirely. She was obviously blind in that eye, but it didn't appear to trouble her and we agreed that she was quite cute.

But we didn't bring her in. We had enough indoors cats to last a while!

One morning in November, my mother didn't make her rounds as normal. I found her in the kitchen, in terrible pain from her right leg and foot. After two visits to the doctor who had done the bypass in in both of her legs, and a round of tests and X-Rays, Dr. B_______ told us that my mother's right leg would have to be amputated.

My mother was very brave. I don't believe that she ever cried in front of me. She came home and tolerated the pain as long as she could. In December, just at Christmastime, she went into the hospital.

She did not come home for three months, and I spent the winter alone in the house. Every morning and afternoon I visited my mother (usually bringing food!), and every night I came home and fed the cats indoors and out. The little kitten who was blind in one eye was always out there, alone. She never went to the barn or tried to find real shelter. She sat behind a drift of snow, as much out of the wind as possible, close to the house, waiting.

One night I could not stand it anymore. I held the door open for her. If she came in of her own volition, she could stay.

I set up a cat tray in my bathroom and kept her closed up in there for the first week, during the days. She was so happy to see me at the end of the day; and at bedtime I would let her out to walk around a bit.

She started sleeping with me every night, right on top of me, curled up on my chest under my chin. I named her Popeye, but that didn't take. She was too cute and huggy for that name. In the end, she just started answering to Honey.

She's much too big now to sleep on my chest, but she still sleeps with me every night, snuggled up at the head of the bed, right beside me, under my arm. I always wanted a nice kitty to snuggle with on a cold night. It's strange to think that the poor sick kitten that I wanted to put down would turn out to be my favorite cat ever.