The day the fire died 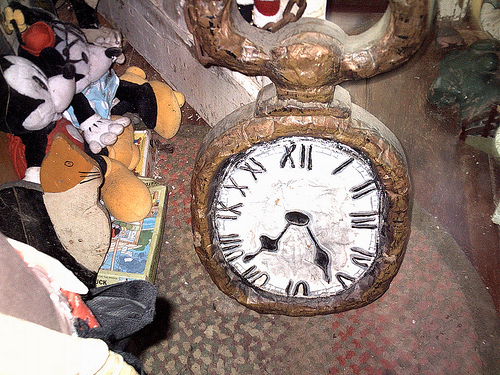 Yesterday I found, neatly packed in a box in the basement, a terrific hooked rug that my mother made in 1962. The design was almost Mondrian-boxlike, with a different element in each box: half a sun, my mother's name, and more. I'd forgotten all about it; had half-forgotten that she ever worked in that medium.

She was so creative and did so many different kinds of things. Signs, clothing, handbags, papier mache fruit and flower arrangements, wooden carvings, wire creations, toys, jack-in-the-boxes, engraved leather work -- and sometimes combinations of all those things. She made the papier mache clock sign in the picture above. She was always working on something, in between raising us kids and doing many antique shows every year.

She sold a lot of it. I remember the summer she got the commission from Unionmutual to do hand-tooled leather bags to be given away at a company event. The arrangements sold at antique shows, as many as she could make. Some of her pieces are still on display at a pancake restaurant in the state capital. Her Jack-in-the-boxes were exhibited at the Farnsworth Museum in Rockland, Maine, which is otherwise notable for its collection of the work of three generations of Wyeths.

And then, suddenly, she stopped.

This was in the early eighties, right around the time she and my father divorced. The flow of creativity just stopped dead in its tracks, and another flow began, as she started to fill every corner of the house with antiques, toys, books, magazines, Disneyana, vintage games, Disneyana, dolls, teddy bears, and more Disneyana. Whether or not it was antique didn't matter. If it tickled her or struck her fancy, it came home with her.

She claimed to be claustrophobic, but she created a house that had one narrow path to allow a person through. In a way, the house itself became her magnum opus, a collage of Fun Things done on a colossal scale. It wasn't like the homes of hoarders you see on television. It was all neatly and artfully arranged, until after the operation to amputate her right leg robbed her of her ability to venture very far into the house.

When she ran out of money and couldn't afford to buy anything anymore, it made her so sad that she cried.

It was as if she was filling the empty space inside of her that was created when she stopped making art of her own.

It was a cruel thing for one brother to say to another, but it was true.
Posted by Freder at 12:57 PM