Playing with Paper, and a Petrified Pussycat 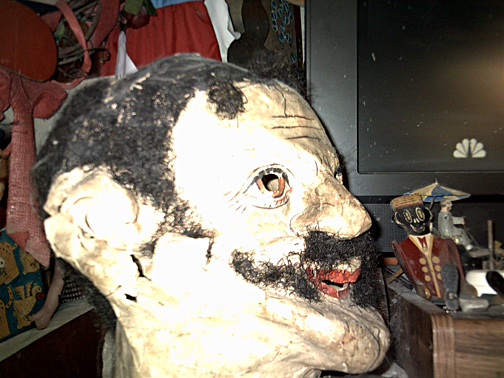 I dove right in, using the India Ink to blacken the pages of the ledger book I am turning into a photo scrapbook of the house. This is better quality ink than the last bottle I had (love the name: Black Cat), or else the stuff in my original bottle was just so old that it had congealed a bit and lost its potency. It covers  everything! By the time I had finished about eight pages in the front and back of the book, my fingers were black all the way down. With much scrubbing, it came off of my skin, but my fingernails made it look like I was headed to a goth club! All day at work I tried to keep them hidden. "It's not black nail polish, people! It's India Ink!"

I've probably typed it before, but working on the scrapbook is what Martha Stewart would call A Good Thing. It's a positive activity that allows me to look back without regret.

Along with the prints, I got five more 8 X 10 enlargements. These turned out wonderfully well. Much more so than the regular size snaps, they really convey the physicality of the house and its contents. I wish I could blow them up to room-size and paper the walls with them!

Actually, I could project them onto a wall and do a mural. That's not such a bad idea for the new house, whatever it turns out to be.

One of my student workers said that I could get one of those "I Spy" books out of these pictures, and the enlargements have convinced me it's a smashing idea. Too bad that higher quality pictures can't be taken. It's history, now.

Tiger Whitestockings is in the house. Unsupervised. I hope the place isn't getting torn apart while I'm at work. I didn't mean to keep her in for the whole day, but that's how it worked out.

It was raining cold and hard when I got home last night, and Tiger Whitestockings was soaked through, crying at me out of the dark. Still, she wouldn't come in when I held the door open for her. I finally said, "I really think you should come in," and grabbed her!

I showed her the food and the cat tray, and she promptly disappeared. She stayed hidden for a couple of hours. I was watching the final episode of Farscape (with John finally proposing to Aeryn just before they are blown to smithereens, yes, smithereens, by a UFO -- no wonder the fans were pissed when Sci-Fi canceled the  show!) when I suddenly noticed her at my feet. I pulled her up onto my lap and she settled right down and purred and purred.

But when I went in to work on the scrapbook, she disappeared again, and I haven't seen her since. There was no time to look for her this morning: I overslept and was running dramatically late. No time to clean the cat trays. The house will be a pit when I get home!