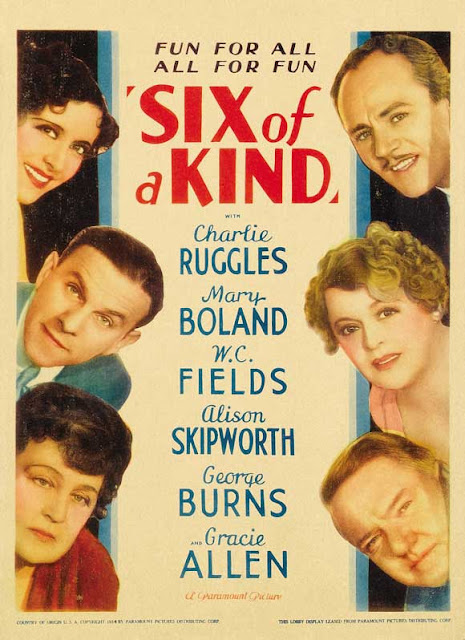 Six of a Kind is the movie equivalent of a cookie. It's fun, light, easy, and it's over fast. The re-teaming of W. C. Fields and Alison Skipworth (whose earlier teaming in Tillie & Gus is fondly remembered by me, though it's another missing link on DVD) was my main reason for wanting to see this picture, but just look at the rest of the cast -- and they all get equal opportunity.

I'd never thought about it before, but the picture is actually pretty racy for the time: the entire plot centers around a middle-aged couple's "second honeymoon" and the continual frustration of their efforts to sleep together. The movie even ends with Charlie Ruggles leaping enthusiastically into the bed where his wife, Mary Boland, is already ensconced.

So we can assume it's a happy ending, although Ruggles and Boland are of a certain age and this was in the days long before Viagra!

Burns and Allen play an unmarried pair of congenial control freaks who force their way into the Ruggles Honeymoon and do everything in their power to annoy, frustrate, misdirect and otherwise ruin the vacation. Fields plays "Honest John," the sheriff of a small backwater, while Skipworth owns the local hotel. The situation is complicated by a sub-plot involving a bag of stolen bank notes that's foisted onto Ruggles by the actual thief. Once the money is discovered, Fields and Skipworth naturally want a piece of it, while Burns & Allen immediately shuck themselves of Ruggles and hightail it out of town by commandeering the car of another feckless couple.

Ruggles and Boland are actually pretty darned good at their kind of frippery, while Burns and Allen get a chance to lend a mild dark side to their act. Fields gets his moment and a chance to show off his skill with a pool cube in a sequence that seems to have been filmed without much interference from the director.

This is a picture that I needed to upgrade from VHS, and it came with two other Burns & Allen pictures in one package. I have my doubts about those: I can only take Burns & Allen in very small doses (Gracie sometimes walks an awfully fine line between funny and annoying) ; it will be interesting to see if the pair can actually sustain a picture by themselves.