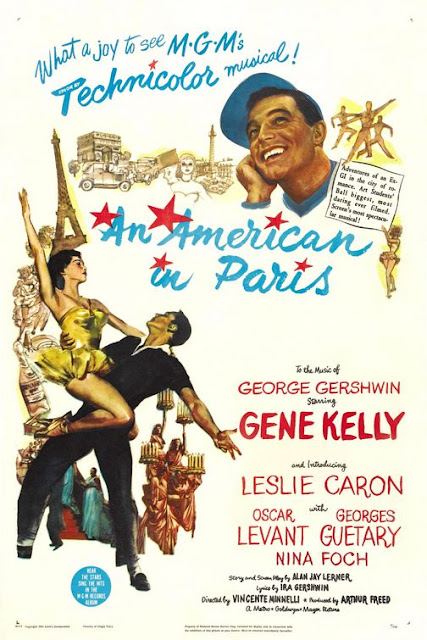 An American in Paris really is just like a straight-up shot of Happiness. The songs are among Gershwin’s best, the design and settings are so vibrant and full of life (if unrealistic -- the final ballet makes it clear that Mr. Minnelli isn’t making any attempt to show us Paris; rather, he’s putting us into an Impressionist painting of the city); this really is the way color should be utilized in cinema.

Gene Kelly is such a cool cat that I can’t even hate him for being such a cool cat. Leslie Caron is possibly my favorite movie musical leading lady (why in God’s name can’t they get Lili out on DVD? That, my friends, is one of the best ever). And Oscar Levant is a hoot essentially playing a milder version of himself.

Kelly’s choreography is free and easy and full-blooded. Unlike Astaire, whose style is so light and airy that it’s almost other-worldly, Kelly is earthy, flaunting his physicality and his All-American enthusiasm.

The story? Feh. It’s just boy meets girl. But what a boy meeting what a girl in what a place, in dazzling clothes against dazzling backdrops, in dances that caress, collide and withdraw.

Kelly even comes with his own personal spotlight: that big, unending smile. An American in Paris is just infectious, and it accomplishes that which modern cinema seems to have forgotten how to do, even with all the bells, whistles and computers at its command: It charms.

P.S. – Y’know, I never thought of it this way, but if Fred Astaire is Air, and Gene Kelly is Earth, then Cyd Charisse is definitely Fire and Ginger Rogers has got to be smooth, flowing Water. The four elements of Movie Dance!