Mountains to Move and Thanksgiving Redux 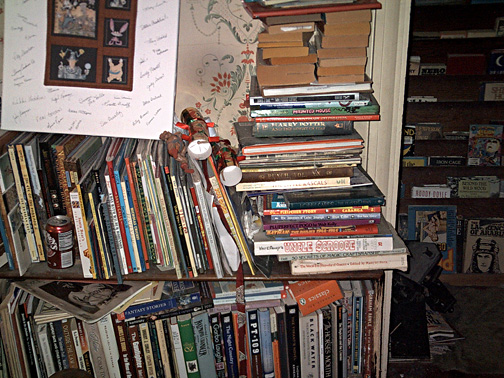 I am actually thankful that I have a lawyer who is a nice person and was concerned enough about me to invite me to her festivities. And I'm thankful that Whitey and Honey, at least, loved the turkey I gave them.

The actual festivities. . . I've had better, I've had worse.

The worst ever was a holiday fete at least a decade ago with my then-girlfriend and her extended family. This was like something out of H. P. Lovecraft. They all looked exactly alike, as if they had been deeply inbred, and this impression was reinforced by my then-girlfriend's confession, prior to the event, that while in her twenties she had conducted a lengthy sexual affair with her own cousin -- and had gone back to him after her divorce from her first husband. And, yes, the guy was there at the family event.

I can think of one really good word to describe the affair: **SQUIRM!**

The only really squirmish factor about this Thanksgiving was being the odd man at a family gathering. J____ had another guest, thank goodness, K_______, a woman visiting for the week from Florida. She had a deep Southern accent and turned out to be quite social, even forward. You might even say that she was close to being a Dirty Old Woman!

But I learned that between 2008 and 2009 she had had herself a Bad Year that put my Bad Year of 2010 to shame. Her husband died, she was diagnosed with breast cancer, her younger brother killed himself, her nephew died playing something that she called "The Choking Game," (I do not want to know the details), and more.

She must have the Cheerful Gene to come through all of that and be as open and upbeat as she was.

I do not have the Cheerful Gene, as those of you who know me are well aware, and I tend to be Eeyore in the best of times.

There was one more nice thing about the afternoon. One of the people was a thirty-something woman, and midway through the afternoon she started looking at me. That way. I didn't discourage it. It's been years and years since a woman looked at me That Way. I'll admit I enjoyed it.

Of course she's married to my lawyer's son, so it's a complete non-starter, but that's okay, too. A little innocent flirtation never hurt anyone.

I came home, gave the cats their treat, made myself a pizza, had my movie night, and didn't fall asleep on it.

The next day was All For Packing. The new house had better actually happen, because I have started to pack For Real and in ways the make the house even more depressing. I have one room basically done, and a good start in several other rooms.

Mainly, yesterday was all about packing up boxes full of books. I went through most of my mother's books and sorted what I wanted to keep from what I wanted not to keep, then started in on my own shelves. I packed up eighteen large boxes of books, carried them downstairs to my "staging area," and guess what? If you look at my shelves you would never know that I had packed anything at all. I realized that "I Have Not Yet Begun" to pack books! Funny -- it was so easy getting them in to the house!

But -- that picture up above? That's all boxed up and the shelf is down in my mother's bedroom, waiting to be loaded up. As soon as the Closing happens on the All-New, All-Different Duck House, I will be ready to start moving.

Fingers Crossed, I hope that it happens this week.

Hope all of you out there in the interwebs land had yourself a good holiday.