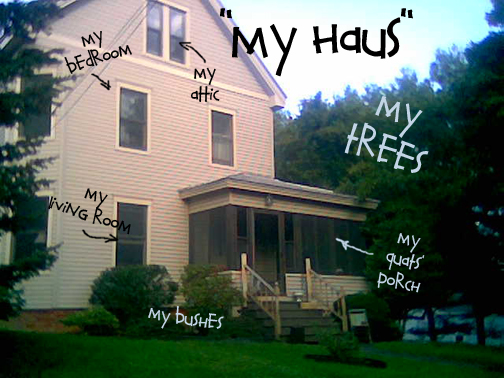 I felt fine! No anxiety, no depression -- I felt (dare I say it) chipper. Even cheerful. I can't remember the last time this happened. No, I mean I really can't.

What could be the cause of this sudden sense of okay-ness? Most likely, it's to do with "my" new house. I've been by there two mornings in a row in order to sign papers for the current owner, and both times I've left with a refreshing sense of anticipation.

It's literally three minutes away from my job. This means I'll be getting an hour back out of my life every day, not to mention the savings on gasoline. It means I can go home at lunchtime and feed and talk to the cats.

Folks have looked at the pictures and are saying things like "That's a lot of house" -- and it is, but compare it to the manse I am living in now. My mother's house has six bedrooms, four and a half baths, a pantry, a workshop, a large kitchen, a dining room, a living room, a front sitting room, and a study. The new house has four bedrooms, two baths, a small kitchen, a study, a dining room, a living room, and a side sitting room. The latter rooms sort of evoke the ones in my mother's house, but they are significantly smaller.

There won't be an echo!

It has something my mother's house does not: a three-season screened porch. My kitties will LOVE that!

The loan officer I spoke to is positive that the mortgage will go through. She thinks they can turn it around in as little as three weeks. If not -- then the closing is no later than December 31. The payments will be a little steep and tight at first, but as soon as the money comes in from the estate I can pay down at no penalty and re-negotiate to payments at a much more manageable level.

My father is helping, in the short term, but he will be repaid sooner rather than later. I don't mind owing the bank money, but it drives me crazy to owe him and his wife. The one who really made this all possible is my mother. You've seen the pictures (if not, go look now). Late in life she had terrible cash flow problems, and I often wondered why she didn't just sell the stuff and lay her worries to rest. Instead, she came crying to me every other month, asking for money I couldn't easily spare. She kept saying she would pay me back.

She'll do that, with much interest, but I wish it hadn't happened this way.
Posted by Freder at 4:11 PM

Email ThisBlogThis!Share to TwitterShare to FacebookShare to Pinterest
Labels: Dad, starting over, The New Haus