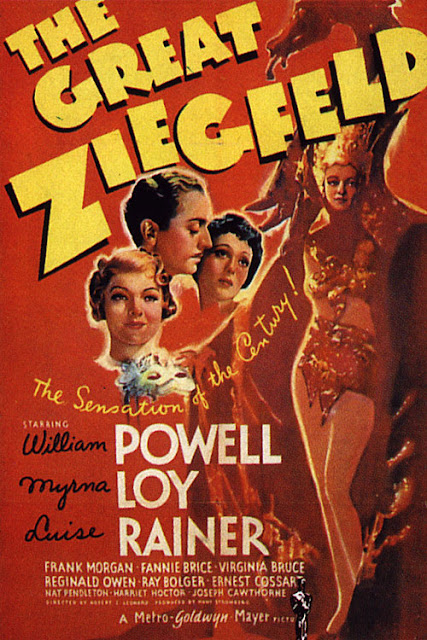 Clocking in at just over three hours -- an almost unheard-of runtime for a picture made in the middle '30s -- and splashed with truckloads of sequins, The Great Ziegfeld is both a zestful discovery and an ordeal.

It's like getting two pictures in one: the first is a pretty good, fun biopic chock full of familiar faces; the second is almost a documentary re-creation of some of Ziegfeld's great shows.

William Powell is always worth watching, and here he delivers an engaging characterization of the great theatrical impresario, warts and all. Although second-billed, Myrna Loy doesn't appear until well into the final third of the film, as Ziegfeld's second wife Billie Burke, she of the quavering voice, Topper and the land of Oz. Without trying to imitate Burke, Loy evokes her splendidly, and grounds the movie so well that the billing is deserved.

But the whole cast is wonderful, really -- we get a much larger taste of Frank Morgan than in The Wizard of Oz, we get Will Rogers and Fannie Brice and Ray Bolger not just playing themselves, but recreating the very acts that attracted Hollywood to them; and it's all contained by a solid drama that Ziegfeld himself created as surely as he created his own shows.

The man was financially irresponsible to say the least, too fond of the female exterior, and too shallow to produce works of any depth. He was all surface, and so were his shows. "More steps!" Powell whispers as a cadre of Ziegfeld angels guide him out of this life. "I've got to have more steps!"

The musical numbers are indeed as spectacular as any ever filmed, but after a while, much like pornography, their sameness becomes apparent and they begin to become monotonous. Another cluster of girls arranged artfully on another spectacular set, not doing much of anything other than standing there and letting the light play over their sequin-studded costumes.

This was made and marketed as a "spectacular," and oh, how it tries. From an extravagant opening in an idealized sideshow to its final scene with Ziegfeld dying in a tiny room while the lights of his own theater glitter through the windows like a Heaven that's just out of reach, it marshals all of MGM's considerable resources to throw glamour at the screen by the trough-full. The Great Ziegfeld isn't -- not quite. But it has a lot to offer, and for the most part it rewards the endurance required to sit through it.