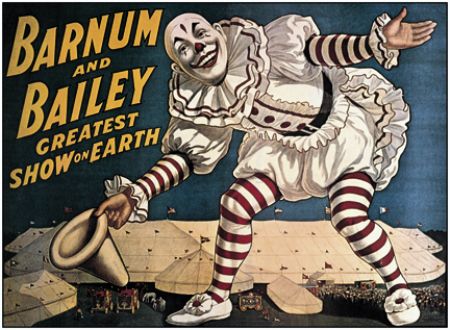 This is an article I wrote years ago for my long-defunct literary zine, Millennium. I dug it out of mothballs because I watched the documentary Circus on PBS last night, and it made me sweek with glee. Wherever possible I've hyperlinked names with their entries at Circopedia.

While the rest of the nation spends their Sunday afternoon watching a gaggle of hulking hyper-thyroid morons battering each other senseless in a contest to decide if football can possibly make us dumber than, say, watching football, I shall be watching an angel triumph over gravity. Video tape was made for Super Bowl Sunday, and thanks to video I can take my Day of Athleticism in the form of the Circus.

Where team sports represents the suppression of the individual and the crushing of one’s opponent into the dirt, the modern circus presents a team of an entirely different sort, where individual strengths are always given the chance to shine, and the goal is common attainment of flight. Where football fans dream of breaking bones, the circus dreams of breaking natural laws, of aspiration, of stretching flesh and bone to the limits of the heart and mind. This is nothing more or less than evolution in the purest sense: the effort of man to haul itself bodily out of the limitations of clay.

There are good circuses and there are not-so-good circuses, the latter almost certainly giving rise to the myth of the Circus of Darkness or evil as personified in Ray Bradbury’s masterful Something Wicked This Way Comes. It is the good circuses that concern us here -- and North America is fortunate to have at least three Very Good circuses alive and thriving as the datebook turns over its latest page. In one form or another I’ve been fortunate to see the work of all three.

The three-ring circus is purely American in design: growing out of the idea that more is better and that audiences served up with more than they can possibly digest in one sitting will come away from the performance in a state of effulgent dizziness, sated beyond all the dreams of gluttony.

Ringling Bros. & Barnum & Bailey is to other circuses what the United States Government is to, say, the Government of Finland: huge, tentacled, sprawling, and layered with level upon level of support systems. And damn do they put on a show.

We saw the 124th Edition in Boston nearly four years ago. Our reservations about three-ring circuses were well-founded: because there’s an inherent unfairness about them for the performers, who must try to hold the attention of the audience over two other acts (and sometimes many more) simultaneously in performance. In theory this is probably designed to spur them on to greater heights, but we doubt that’s how it works in practice.

The featured act that year were the baby elephants Romeo and Juliette, and as a featured act they were kind of a bust. Never mind. In a three-ring circus there is always more to see. There were dancers spinning about in spiderweb ropes thirty feet above the ground, hanging by their toes or their teeth, balanced on one hand; there were dozens of acrobats flying over, around and through each other at dizzying speeds, creating an atomic effect on a grand human scale; there were Cossak riders and plate balancers and animals both wild and tame. In Ringling Brothers and Barnum and Bailey, the moral seems to be not so much that the natural laws of space and gravity can be broken, but they can be broken easily, repeatedly and en masse. Even the clowns, many experts in their craft, came by the dozens: because of their Florida Clown School, Ringling is able to turn out highly skilled clowns in numbers that would choke even one of those little VW Cars that spits out clowns in  alarming quantity. There’s no time for subtlety in this kind of Clown Show: we are provided with an entire race of the things, each moving through their performances with the precision of an aerialist.

In 1995 we were honored to witness the “Grandma Meets Mummenshanz” edition of The Big Apple Circus, an unusual edition of an already unusual circus.

Easily the greatest and classiest of one-ring American circuses, Paul Binder’s Big Apple Circus is unbelievably intimate in atmosphere compared to the Ringling Production, not only for the smallness of the tent and the closeness of the seats to the ring, but for the one-on-one interaction of the performers with the crowd.

In a beautifully designed tent layered with cloth and canvas, stars and stripes, a modern band played on a platform above the ring and the acts rolled out one by one. With a refreshing lack of pretension the performers (each of them among the best in the world) went through their paces before and above us: because The Big Apple takes a traditional approach to the circus arts, and takes them more seriously than any of the small American circuses, the audience was given a complete array of acts presented with straightforward dynamism: the idea being that acts themselves are dazzling enough without a bunch of unnecessary glitter. Highlights included an amazing three-person strength/statue act, the lovely Elena Panova on trapeze, horses, balancing, high-flying and an elaborate juggling setpiece. Only the pig act disappointed; the oinkers did not seem to be co-operating that afternoon.

Perhaps in a concession to the open artiness of La Cirque du Soleil, this edition of the Big Apple Circus included performances by the panto group Mummenshanz, which proved that they can be as engaging circus performers as any. In one sequence they worked closely with featured clown Barry Lubin, who appeared throughout in his justifiably famous Grandma character (Lubin is one of the two or three greatest living Clowns, a national treasure on par with Lou Jacobs and Emmett Kelly). The combination was electric, adding a note of unique specialness to this edition.

There are those who view Canada’s Cirque du Soleil as avant-garde, or nontraditional; but to our minds the Cirque is about as traditional as they come. The question is which tradition. There are no animal acts, which is a departure; and the tone owes as much to Cirque artistic directors Franco Dragone and Guy Laliberté’s background as street performers as it does to the circus. The effect is entirely European, and in that regard the tradition that Cirque follows may go back farther than any other circus in the world.

Like The Big Apple Circus, Cirque du Soleil plays in a single ring under a tent that seats a relatively intimate crowd. Lacking the animal acts, it combines feats of almost inhuman skill and daring with world-class clown performers, exciting original music, dramatic lighting, loosely structured plot settings and an unusual “Greek Chorus” of brightly garbed, masked onlookers. We have seen them only on video: the best of these (We Reinvent the Circus, Nouvelle Experience and the just-released Quidam) represent shortened versions of the tours -- and the best that circus arts have to offer.

In Quidam, La Cirque repeats a device from an earlier show: the inhuman visitant who bestows a Magic Hat upon a frustrated and drab want-a-lifer (in this case a young girl whose parents hide behind newspapers), who then experiences ecstatic visions of human attainment: the clear message being “We can do this: we can touch the sky: and by extension, so can you.”

Standout acts include a man inside a wheel -- just like a European toy from the last century -- the obligatory but always astonishing statue act (as literal a metaphor as you will ever find for man’s ability to mold elegance and symmetry out of raw clay), some very fine clowning and, best of all, an aerial act of exquisite beauty in which a woman suspends herself thirty feet above the ground merely by wrapping herself in silk.

But then, circus aerialists are the most beautiful women in the world, for dreaming and daring and flying above us all. Try getting that from a football game.
Posted by Freder at 1:00 PM

Email ThisBlogThis!Share to TwitterShare to FacebookShare to Pinterest
Labels: Circus