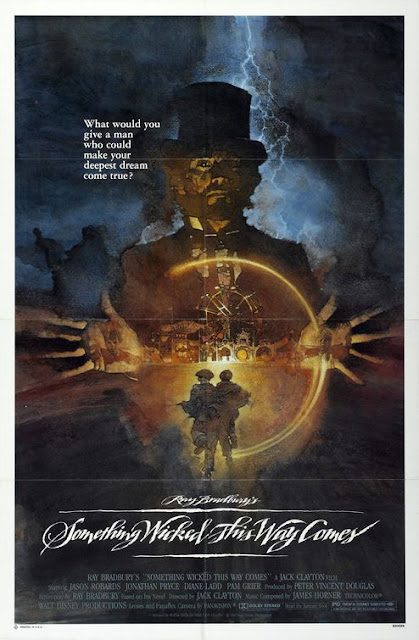 I've thought about it, and decided that Ray Bradbury's Something Wicked This Way Comes must be one of the ten greatest novels in the English language, and one of the five greatest American novels. Its horror is set in the American heartland, but Cooger and Dark's sideshow is about much more than just giving you the shivers. It asks all the big questions about life, death, youth and age, time and history, regret, and the setting aside of regret.

The dark ones feed off tears, and I have been giving them an awful lot of sustenance lately. That has to stop. Tears do not honor the dead.

All of this is due to my recent viewing of Jack Clayton's film version of the book, scripted by Mr. Bradbury himself. It's just about as good as any film adaptation could be, at least on this budget, benefiting greatly from a deeply felt performance from Jason Robards and a tightly controlled one from Jonathan Pryce as Mr. Dark.

Their main confrontation in the town library, with Dark literally ripping the pages out of Robards's book of life, is probably the film's best scene, coming straight from the book, a confrontation unlike any other I can think of on film. Robards plays a man choked with regret, but one wise enough to refuse Mr. Dark's offer of "help."

For Mr. Dark only gives gifts that take away. He lives to turn children into sad old people, and to bait victims with dreams come true in order feed on their pain when the dream turns to ashes.

This was to be my movie for Halloween night, but it was delayed until two nights later. It was exactly the right story to revisit in the fall of 2010. I thought it would make me sad, but it had the opposite effect. When Robards urges his young son to stop despairing -- "That's what they like! Come on! Whoop it up! Make some noise!" -- it's almost a moment to make one leap out of the chair and applaud.

And now with the October Country behind me it's time for me to turn away the dark in more ways than one.