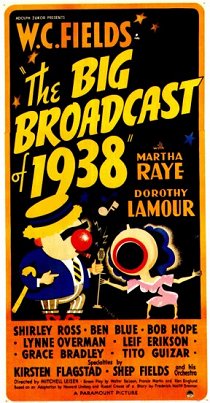 Why MCA's DVD release of The Big Broadcast of 1938 came as part of a Bob Hope set is beyond me, when Fields gets top billing and is clearly the only reason to watch the movie! Oh, sure, Bob introduces his signature tune, "Thanks for The Memories," and it's a nice scene. But Fields gets much more screen time and makes the most of it. And, since Edith Head designed the costumes, it's nice to see The Great Man look dashing for a change.

The plot concerns a trans-Atlantic race between two steamships. That's pretty much it: just a clothes horse to hang novelty numbers and comedy scenes on. The novelty numbers are, alas, particularly uninteresting -- most likely the reason why I didn't remember any of them.

Never mind. Fields gets things off to a smashing start with a whirlwind round of golf, careering around the course on a rocket cart and shouting "Get out of the way!" to a throng of cowering caddies, before putting the wings down and literally taking to the air. As the bad-luck brother of the owner of the steamship Gigantic, Fields is meant to sabotage the other boat simply by gracing it with his destructive presence; instead, he lands on his own ship and promptly shuts down the new radio-power invention that was guaranteed to win his company the race.

Dorothy Lamour is on hand, but she can't wait to get rid of Hope so that she can sing and smarm over Leif Erikson as the Young Inventor. Hope's three former wives are also present to insure their alimony payments. Hope himself is the emcee of the Big Broadcast of the film's title, which seems to go on endlessly.

Of course Fields gets a snooker sequence, cheating outrageously and blaming the other fellow. Martha Raye arrives, powering a lifeboat with her own Mighty Lungs, and turns out to be Fields's even more disaster-prone daughter. Fields tries to leave her abandoned at sea.

The race is all but lost before Fields realizes his mistake and assumes command, piloting the boat through a maze of icebergs with approximately the same level of caution that he piloted the golf cart earlier on.

With its gimmicks and effects, this is more like Never Give a Sucker an Even Break than it is like My Little Chickadee or The Old-Fashioned Way, both of which are better comedies. But when Fields is on-screen, he fills it with gusto, even though his health was already starting to wane.

Also on the bill was a Little Rascals comedy, with Alfafa murdering "The Barber of Seville" right and left, and an uncredited Henry Brandon as an evil agent. Brandon was then under contract to Hal Roach, and went on to play the horrible Mister Barnaby in Laurel & Hardy's Babes in Toyland, among other notable but small roles. 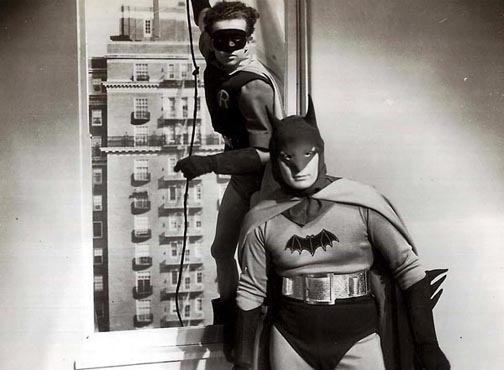 And I'm nearing the end of the 1943 "So Bad It's Good" Batman serial from Columbia. Columbia's serials were the bottom of the barrel in most every way, but they had the buying power to outbid Republic on both Batman and Superman. Their Superman literally turned into a cartoon every time he flew, while Republic's Captain Marvel, filmed years earlier, soared convincingly. You can bet your bottom dollar that a Republic Batman would not have been the chubby, frumpy guy in the ill-fitting and ill-tailored Halloween Costume that you see above! Every episode opens with some nifty mysterioso mood music, but once the action starts I keep expecting Graham Chapman to show up with his swagger stick and shout, "Stop that! It's silly!"
Posted by Freder at 8:00 AM