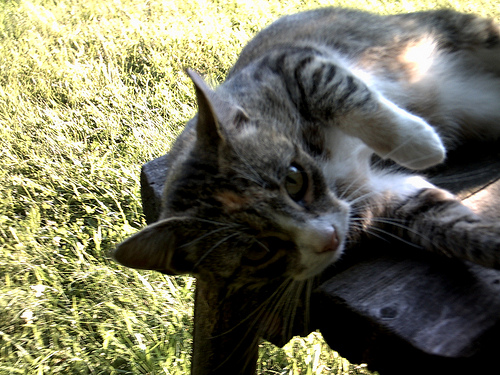 The experiment of bringing Tiger Whitestockings into the house was already going south (see post: "The Whitestockings Case"), but last night it crashed and burned spectacularly.

I woke up in the middle of the night to Whitestockings picking and scratching on my comforter. Then I caught the dreadful pong of urine. She had gone to the bathroom on my bed, right next to me!

Any cat that urinates in the same place that it sleeps (not to mention IN MY BED) is too wild to bring indoors.

So I was up at 5:00 AM doing a complete change of the linen, and scrubbing the mattress. After that chore was done I was so wide awake that I knew I would never get to sleep without a drink to relax me. I shouldn't have done it, but I did.

This morning she went outside. She went willingly, even happily, even though it was cold. When I brought out her breakfast, she was on the other side of the yard, sniffing the leaves on the bushes with her tail in the air. She came running for her food, and I haven't seen her looking so contented since I brought her in.

Some things just are what they are. I hope she can adjust to a new yard.