"Is your journey really necessary?" 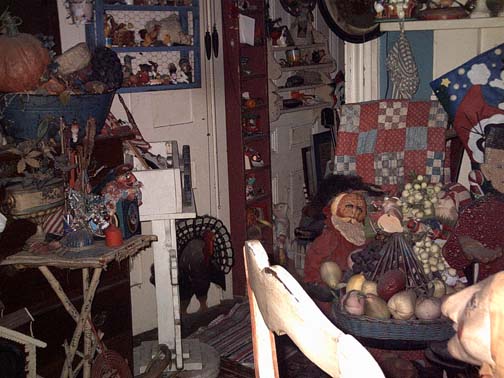 Yesterday was a dousing of cold water. I won't tell you about my reaction, because it's beginning to sound like a broken record, even to me. But I will ask the question:: if I'm hit this hard at this stage of the game, how in hell am I going to hold it together when they actually begin to pull the house apart?

The day started early with me once again trying to make the house presentable. This was made extra-difficult by Spooky, my incontinent cat, who was having a bad day, pooping absolutely everywhere as fast as I could clean it up. I had to change the towels on the living room sofa.

I was expecting one guy, a representative of the auction house. Instead, when they finally found me (about 15 minutes late), two guys got out of the car. And told me that Mr. J______, in person, would be coming along, too. I told them that once we got into the house it was going to be single file all the way. They didn't believe me at first. Then they stepped inside, and fell silent real fast.

The thought of these three big men somehow navigating that space gave me the willies, but it didn't seem to faze the cats at all. Patchy sat quietly on the top of the davenport and watched them without much interest.

This is the third time I've had to give a tour of the house to strangers. Picking at my mother's ashes. It took about an hour. By the time they left I really, really wanted to add some vodka to my orange juice. But I don't do that anymore.

Then a rush to get into work, then another rush to get downtown by 11:30 for my appointment with Dr. Shrinker (I should blog about how the Mandatory Counseling thing came to happen), only to find that I had the wrong day and the wrong time. She was very nice about it, her schedule was clear, so she saw me anyway.

I was able to report the reduction in my drinking. She wants me to completely go cold turkey, but I'm not quite ready to go that far. We talked about the day that the auctioneers will come to clean the house out. It was the first time I've broken down in front of her.

She said that I should look at it differently. My mother's things will be cared for, and will go to people who will enjoy them,

I took pictures in the closed guest room before bedtime. Lots of Steiff and paper Halloween in there. Some of it will be staying with me.