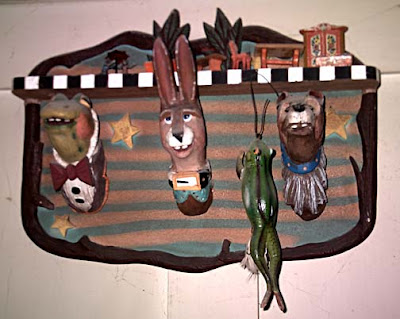 I was excited this morning to stop by my brand-new PO Box and find something inside: the prints that I ordered of my digital photos!

Then I realized that much of the backstory is missing from this blog. For example, you might ask why I needed a PO Box when I have a perfectly good mailbox at my home.

Other than a brief post when I started the blog, I haven't mentioned my sister much at all.

I didn't want to obsess or vent or rant or rage, though I've been doing a fair amount of that away from here.

So: some missing links from the backstory.

The week after our mother died, my sister began entering my home illegally while I was away at work. She  stole a lot of my mother's things right out of the house, took them to an antiques shop on the coast and sold them at way below market value.

Why didn't I notice right away? If you've looked at some of the photos I've posted here (including the slideshow in the sidebar and at the bottom of the page, "Views from the Funhouse"), you can see why. My mother was a hoarder, and it's easy to take one or two things out of any given location, re-arrange a bit, and no one is the wiser. Also, I was stumbling around the house in a drunken state of despair.

But eventually, I did notice. I immediately had the locks changed and the burglar alarm system brought back on-line.

As soon as she could no longer access the main house, my sister broke into the barns and outbuildings and stole a large amount of things from there. To make it look like an outside job she broke a window. I can safely say that she is the one responsible; I have both a written confession and a voice message on my answering machine in which she doesn't deny anything.

That was when I called in the state police. I still haven't gotten any results from them. But I will press charges if I am allowed.

Then, someone stole my credit card statement right out of the mailbox and made a run on my card to the tune of $5,000.

I say someone, but this is exactly my sister's M.O.: she once stole one of my mother's Social Security checks out of the mailbox, forged the signature and cashed it.

So -- not only did I lose my mother and my best friend, but I have been fending off attacks from my sister ever since.

P.S. -- the prints turned out really great! Not bad for a cheap $50 digital camera!

Email ThisBlogThis!Share to TwitterShare to FacebookShare to Pinterest
Labels: alcoholism, the collection, the wolf