Conquest of the simian blather! 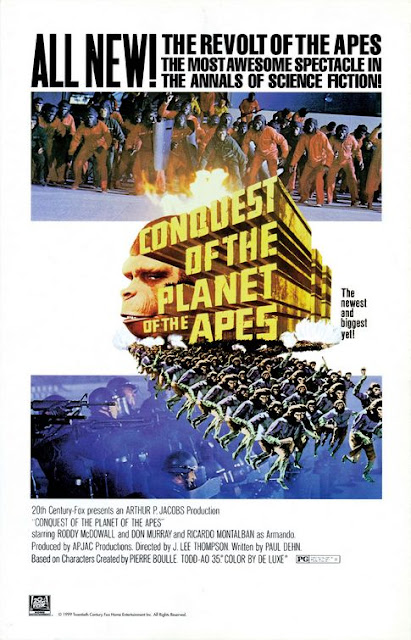 Moving right along through Arthur P. Jacobs's mad series of SF weirdness. Excepting only Beneath, all of the Apes movies have a remarkably different tone and direction. Conquest is the movie that brings the storyline full-circle, with Roddy McDowell appearing as his own son, Milo | Caesar, to launch the beginnings of the revolt against humankind that ultimately ends in Man's downfall and the ascendancy of the ape.

The cheapest of the Apes films so far, Conquest is also pretty daring in its open comparison of Ape slavery to that of African Americans before the American Civil War. There's a lot of brutality on display, mild by today's standards but still having real impact.

But as in Beneath, Conquest sometimes has trouble dealing with its own silliness. The revolution comes together awfully quickly, and Caesar seems to suddenly develop telepathic power over the other apes at about the midpoint of the movie.

Don Murray chews up the screen to an embarrassing degree, but Ricardo Montalban is a pleasure to watch, as ever, and Roddy McDowell turns in his best work in the series; he's now the sole focal point of all the action, and is given quite a lot more to do.

It's too bad, though, that the ending was tampered with in post-production. In the middle of a rallying speech that would really have ended the film on a note of dread, Caesar suddenly backtracks and calls for compassion. It's wildly out of place for the moment that the director has tried to create, and the fact that it's so obviously overdubbed makes it worse. With no footage to cover the additional material, the editor is forced to fall back on reaction shots and close-ups of Roddy McDowell's eyes (with an expression in them that emphatically does not match the sentiments supposedly coming out of his mouth).

It's not a classic, but it does have some impact and is creditable when you consider that it was made for about a buck ninety-eight. And it's the last of the Apes movies to have any cojones at all. I may not even bother to yammer at you next week about the final film in the series. We'll see.