"Get your stinking paws off me you damn dirty ape!" 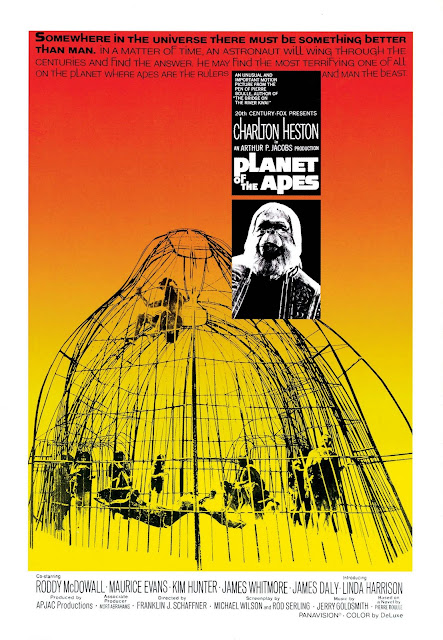 My box set of the APES movies arrived last week. How I loved the original Planet of the Apes when it first came out. My father and I went to see it together. Typically, he got us there half an hour late. But these were the days of continuous shows: the minute the credits stopped rolling, the picture started right up from the beginning. We watched the first half hour that we had missed, and then he wanted to go. I made him stay and sit through the whole rest of the movie again. It was very late when we got out. I didn't mind.

It has stood the test of time quite well thank you. All the elements really work together: script, score, design and performances. I don't normally care for Charlton Heston, but his over-the-top style of growling and emoting works well in this context, while Roddy McDowell, Kin Hunter and Maurice Evans create wonderful characters, doing the real meat and potatoes acting under their piles of make-up.

Meanwhile, Franklin Shaffner really knows how to frame a shot!

The ending no longer shocks, of course, but there's something to be said for the sense of inevitability we get as Taylor rides off to meet his destiny. It's as if our viewpoint has shifted from Taylor to that of Dr. Zaius. He (and we) know what Taylor is going to find, and we know he won't like it.

It's funny how the ending was cut for television airings. Why is it OK to say "Aw, damn you" on TV, and not "God damn you all to hell" ?

Which brings me to the reason I bought this set, rather than duping my VHS tapes. I haven't seen this in the original widescreen since I first saw it as ten-year-old kid sitting in that movie theater. It's much better in widescreen!

The VHS I gave to my father. Will he remember how I made him sit through it twice? I doubt it.