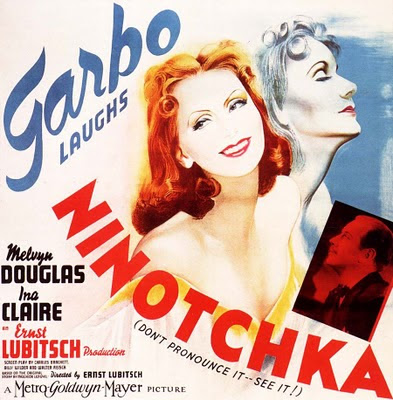 The thing about Ninotchka is that it is self-describing. Quoth Garbo, it is "silly -- but wonderful." There's not much more to add.

I saw it first at the great Skowhegan Cinema -- now called The Strand -- a real old 'twenties style Movie Palace, with a huge screen, the original seats and tiled walls, a balcony and, so its owners claimed, a ghost. It was the fall of 1989, and the Cinema was running a series celebrating the fiftieth anniversary of MGM's remarkable 1939 output. Included on the schedule were Dark Journey with Bette Davis, The Women with Myrna Loy and Joan Crawford, The Wizard of Oz and Gone With the Wind.

We went to many of those shows and it is a great memory. We'd drive up there every Wednesday night and it didn't matter what was on offer. It was the first time I had ever seen some of these movies, and the first ever time I'd seen The Wizard of Oz on the big screen, uncut and without commercials.

Ninotchka immediately became one of my favorite movies. I fell in love with Garbo, and was greatly impressed by Melvyn Douglas. Who else could have delivered dialogue like "Oh, Ninotchka, Ninotchka!" not only without laughing but making it sound like it meant something.

I watched it again the other night, for only the second time, on DVD. And although it held up and then some (and the print was notably better than the one that had been available to the Skowhegan Cinema all those years ago), something was missing. It wasn't just the depth of field that a huge screen brings to a projected image.

The scale was off. These people were my size, not the much larger-than-life figures that I remembered, that they deserved to be. Everything else about the movie was just as I remembered it, and just as fine. But the story was no longer a big one, and Garbo and Douglas were no longer glittering immortals. Just people with their little big love story, in a time and place that no longer exist.

I wonder if the Skowhegan Cinema still has a ghost.