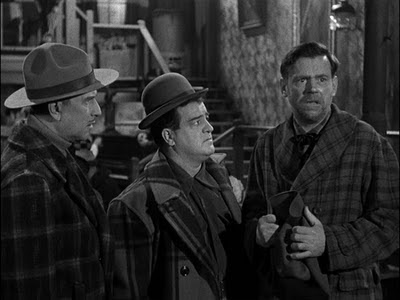 My Friday night movie was Bud Abbott and Lou Costello in Lost in Alaska -- as I work my way slowly back through time, saving their horror comedies for October.

This was a great improvement over A & C go to Mars! Although it was obviously made on a shoestring, this actually works in the boys’ favor: there is nothing to keep them from their appointed rounds and nothing to distract the viewer from the characters.

The first half-hour is especially fun, with the boys as volunteer firemen trying to rescue a guy from the Yukon who’s bent on doing himself in. Bud’s motives are not entirely pure, as he has his eye on the piles of gold that the prospector is weighted down with. In fact, Bud is kind of a sleaze all through this movie. . . very much in character with that godawful mustache he’s adopted at this point in his career.

Lou just concentrates on being very funny, and for the most part he succeeds. Like Stan Laurel and Oliver Hardy, he builds his simple-minded character with ticks and gestures that seem random, but are actually quite precise. He owes much to comedians who came before him, but he’s got his own thing going and by this point he knows the routine very well. I have to wonder what Bud and Lou were like in real life.

Once the action moves north, a very basic melodramatic plot is tacked on, so perfunctory that at the final fade-out the villains and the “good” guys are shaking hands all around. There are lots of good gags, but the comedy becomes more situational and less character-bound. Although I love Lou looking at seals for the first time and mistaking them for dogs.

The truth is, I did fall asleep on this one, but it had nothing to do with my feelings for the picture. It had been a long, emotional week, and I found that an hour spent with Bud and Lou was a little too relaxing.

Email ThisBlogThis!Share to TwitterShare to FacebookShare to Pinterest
Labels: Abbott and Costello, Laurel and Hardy, movies