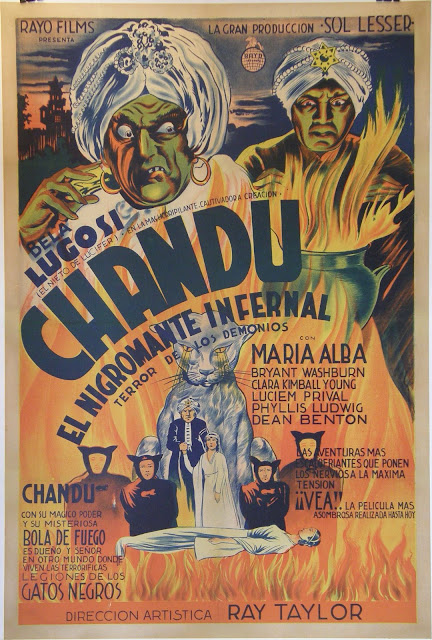 It’s hard to believe that I’ve gone through two whole spindles of DVD-Rs and have started on a third. That represents over a hundred VHS tapes that I can now get rid of, literally yards of shelf space cleared -- and I get to watch it all again (for several years I did not own a working VCR, so the stuff was just sitting there, taking up space).

What’s been going through the pipeline? Mostly serials, including THE RETURN OF CHANDU THE MAGICIAN (with Bela Lugosi gloriously miscast in the title role, and prominently featuring the giant wall from KING KONG), MANHUNT OF MYSTERY ISLAND (with Roy Barcroft and Linda Sterling), HAUNTED HARBOR (with Kane Richmond and Kay Aldridge -- BTW, you may not recognize these names, but in the world of serials these are the big stars!) and even KING OF THE TEXAS RANGERS (Neil Hamilton, who played Commissioner Gordon on the TV series BATMAN, plays the Big Bad Villain in this one).

But I’ve also duped a lot of animation (some early MIGHTY MOUSE), a handful of Charlie Chaplin shorts, and some features including GALAXY EXPRESS 999, a double bill of early John Wayne programmers, and Bergman’s THE MAGICIAN -- my favorite of the whole Bergman catalog, still not available on DVD. Go figure.

Where things are available on DVD, I’ve also been trading up, and giving too much money to Amazon. A couple of W.C. Fields pictures are in that category, along with Paul Newman in HARPER (a mostly bang-on adaptation of Ross MacDonald’s hardboiled mystery THE MOVING TARGET), some Universal horror flicks and SOMETHING WICKED THIS WAY COMES (you see, I am getting ready fo Halloween!).

The sad part of all this is, I am trying to find homes for all this stuff, and guess what? No one wants VHS anymore. My father has been taking some, but his tastes and mine don’t always run in the same direction. My old friend H______ has said that he will take at least some of it, but when I tried to set up a lunch with him communications fell silent. I have bags of these things that need to go away now. Eventually, I’ll dump them on Goodwill, if some takers don’t come along soon.

How ‘bout it? Anyone out there in blogland want some free VHS?
Posted by Freder at 12:19 PM