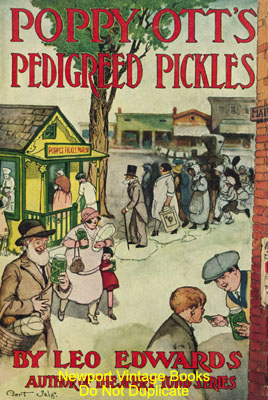 I have a Poppy Ott that needs a good home.

What’s a Poppy Ott, you say? Here’s a piece I wrote years ago that will explain the whole thing. I¹ll meet you at the other end with my “Special Offer.”


*
As a legacy from my father's childhood, I inherited custodianship of a complete set of "Poppy Ott" books. Like the better-known Hardy Boys and Nancy Drew series, also published by Grossett & Dunlap, these were light mystery stories for children. Unlike those better known heroes, the Poppy Ott books combined their mystery with a heady mixture of other influences: "Our Gang" clubhouse trappings, Horatio Alger bootstraps capitalism, small-town atmosphere and a hefty helping of unsubtle humor.

The series' unlikely hero is introduced in Poppy Ott and the Stuttering Parrot, when narrator Jerry Todd (just an average small-town boy, son of a brickmaker, star of another mystery series bearing his name) and his gang discover a pair of tramps -- an old man and a boy -- squatting in a tumbledown trailer at the edge of Tutter, Jerry's home town. Instant mystery: who is this shabby New Kid and where did he come from?

Before Jerry can answer these questions, a traveling medicine show arrives in Tutter, bringing with it a deeper mystery of pirate gold and murdered men -- and the possibility that one of Tutter's respectable citizens may have had a more colorful past than was recently supposed. The tramp boy, at first implicated in the goings-on, takes charge, clears his own name and solves the mystery.

By the end of the book, this Poppy Ott has been cleaned up and transformed into a respectable citizen, with more ambition and bigger ideas than most of the rest of the town combined. Later books show him opening all manner of businesses -- toy novelty manufacturing companies, pancake restaurants and interior decorating firms to name but three -- while continuing to solve mysteries as the head of the boys' Juvenile Jupiter Detective Club, engaging in frequent battles with the rival Stricker gang and having the kind of Outdoors Fun that went the way of all flesh with the invention of TV. All, presumably, while still attending grade school.

The books were illustrated by Bert Salg, in an engaging, scratchy style that still brings the characters -- and the period -- to life, and written by one Leo Edwards, who appears to be the only writer of 'thirties juvenile mysteries who didn't work with quotations around his name. Many of the books featured a special "club house" section which included Edwards's home mailing address in Cambridge, Wisconsin; children were encouraged to write letters and form "Freckled Goldfish" clubs of their own. These "Chatter-Box" pages -- the equivalent of fan clubs -- were often as much fun to read as the books themselves:

"Our chapter held a big Hallowe'en Party. First we had ghost stories, dancing, singing and biting money out of apples. Then 'eats.' We had apples, grapes, nuts, fruit punch and cake. Then the real fun began -- ducking for apples and money! I went after a nickel in the tub. When I came up for air I found my shirt and tie were wet. We had regular printed tickets which we sold. The tickets (printed at school) read like this: HALLOWE'EN PARTY, for the benefit of The Freckled Goldfish Ozone Park Branch, 9115-107 Avenue, at 4:30 O'clock, Admission -- 10 cents. We cleared $3.25 and now we have in the treasury $5.50."

There is no question as to whether these Poppy Ott books withstand the test of time -- they don't, which may be the most compelling reason to go back and read or re-read them today. Unencumbered by any kind of literary worth, the books are free to show us other things: more than simple-minded nostalgia (it's hard to feel nostalgia for a world that has been as completely obliterated as the one these books -- albeit in a wildly distorted, idealized form -- represent), Poppy Ott offers us Time Travel in its purest, most honorable form: sending us back, from the comfort of our easy chairs, not to the world of our fathers, but to the world our fathers dreamed about when they were lads. That is no small accomplishment.


*
Got it? Now get it: I have a first edition of the first book in the series, Poppy Ott and the Stuttering Parrot, that I don’t need. Not in great condition, a reading copy. It’s free to a good home. I also have e-book versions that I created a while back of the first two titles in the series (PDF format) that I’d be happy to email (also free!) to anyone interested. These are complete and unabridged and contain all of the original illustrations by Bert Salg.

Finally! Something in this blog worth reading!