The Current (well, in my place) Cinema 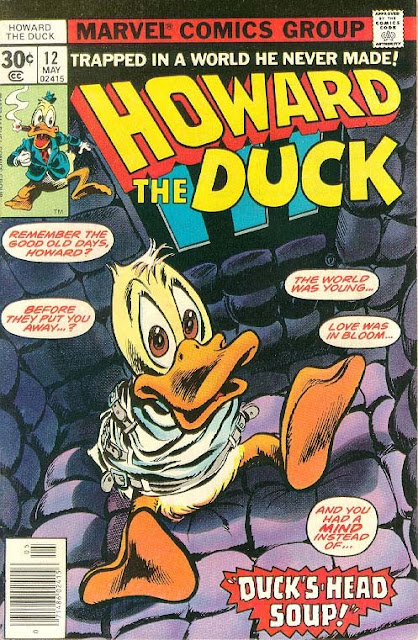 I spend my nights in faraway places. Over the past week I've favored DVDs that take me out of myself..

Friday night was Howard the Duck, the George Lucas, Willard Hyuck and Gloria Katz interpretation of Steve Gerber's classic Marvel Comics series. Gerber is dead now, but for my money he was the progenitor of the truly adult comic book: adult not because of sex, gore, swearing and violence but because of their intelligence, themes and cynicism.

Howard the Duck should have made for a great movie. Instead, it is merely passable -- although not the complete bomb that the criticism of the time would suggest. It actually tries to be a fair adaptation of the comic, and the acting standard is pretty high.

But oh, that duck! What were they thinking? It appears to have been a conscious decision to change Howard's appearance from that of a cartoonish duck into something halfway between a human and a real duck. Not only was it misguided, it was poorly executed. The character is so ugly to look at, with that rim of bare skin around his beady little realistic eyes. Very sadly, it ruins the whole movie. The duck should be appealing in a gravelly, grouchy, cartoonish way, and he's not.

Still, I look at this once in a while and try to appreciate the good parts. This was the first time I'd seen it in widescreen since the original release.

Sunday was Goldfinger. I dunno, revisiting Bond seems like the end-of-summer thing to do. Easily the most sexist and least dramatically sound of the whole series, Goldfinger is my least favorite of the Bonds second only to Dr. No. The whole resolution of the plot depends on Bond's ability not just to bed Pussy Galore (Honor Blackman) but, in doing so, to be so revelatory a lover in, literally, just one roll in the hay to turn Pussy from a very lesbian criminal into an upstanding hetero who has seen the Error of Her Ways. It's deeply offensive. The whole third act is a waste really, but what I learned this go around is that I'd forgotten how much there was to like in the first two thirds. A lot of the value in re-viewing these things in widescreen comes from their travelogue quality: they choose these absolutely stunning locales, shoot them beautifully, let you get a good eyeful of it, and then use it as the backdrop for mayhem. Goldfinger is no exception.

Last night was Harper. Another mid-sixties panavision movie made by people who really know how to frame a shot and take you places. For 95 percent of its runtime it's a near-perfect adaptation of Ross MacDonald's novel, The Moving Target. But the ending is terrible, basically chucking out the whole last chapter of the book and replacing it with a freeze-frame that resolves exactly nothing. The villain's multi-layered motivations are mostly lost, and one important plot point involving the Pamela Tiffin character is jettisoned completely. Lauren Bacall has some fun laying on the bitchy stuff with a trowel, Robert Wagner is, well, Robert Wagner, the great Strother Martin shows up in a role that's subversively funny -- but there's a little too much of Hud in Paul Newman's portrayal of Lew Harper / Archer. Still, the main body of MacDonald's hugely complicated plot is intact, it holds your interest, and two hours go by pretty quickly.

Of course there are short features on Friday nights: currently enjoying a disk of Popeye cartoons, and the new serial is Columbia's 1941 Batman. Oy! The costumes! The "acting!" There isn't even a Batmobile -- the Caped Crusaders drive around in a convertible coupe and giggle at each other like little kids. These Columbia serials make the Republic serials look like Lawrence of Arabia by comparison!

Onward! I haven't decided what to have for dinner yet, but I know the entertainment is going to be Farscape.