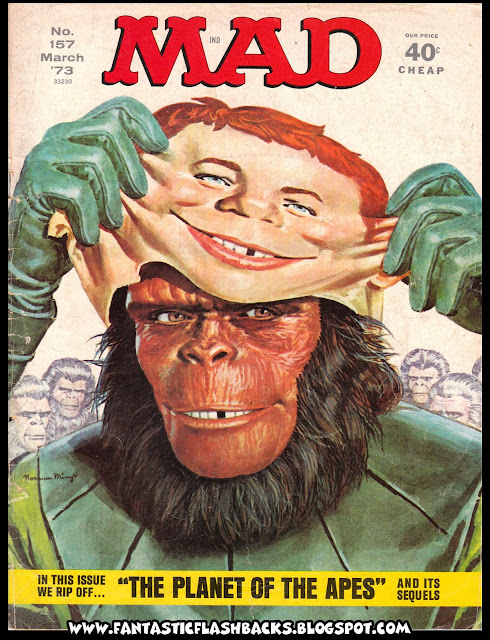 One of he reasons I started this blog was simply to get myself back into the habit of writing -- it didn't matter what. If I can get the habit and the skill back, then perhaps I will be able to tackle larger projects. Would there be any point? I don't know, but you've got to find hope somewhere.
In the meantime, I can limber up with snippets and snappets. In that category -- a week after The Planet that Went Ape (as MAD magazine parodied it back in the day) I followed it up with the sequel, Beneath the Planet that Went Ape.
.
Although it leans quite heavily on its predecessor, this is nowhere near as good. The first two thirds are fairly creditable as a B-movie, but as soon as the mutant humans are introduced the whole affair takes on the tone of a very ordinary installment of Dr. Who or Buck Rogers or some other third-rate SF serial. Poor Victor Buono, a great comic actor who relies on flamboyance as his stock in trade, is here reduced to standing stock-still with his eyes open as wide as possible.
Nonetheless, for its violence and bleakness of vision, the ending still does pack some punch. The creative team must have thought they were insuring themselves against any more sequels. Little did they know.
The standout performance this go-around is from James Gregory as the militant gorilla Ursus. Gregory is a favorite character actor who did an awful lot of TV around this same time period, notably in Westerns like The Big Valley. Who would have thought that he'd make a great ape? He's got a drawling way of delivering a line, and his rabble-rousing speech to the apes early in the film is great fun to watch, probably the best scene in the whole picture.
Next week: Apes meet Howard the Duck.
Posted by Freder at 12:31 PM