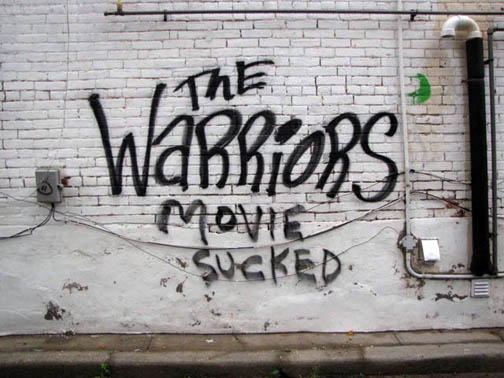 It's an old expression, but it's more meaningful today than ever. Back in the day, when Vincent Canby and Pauline Kael and James Agee and others were plying the trade, criticism was an art.

Today, any idiot with a keyboard and a blog (including myself) can and does put more than their two cents worth before the panting public. Sometimes, their thoughts are considered, informed, and well-written. Most often it's the opposite. Still, no one's holding a gun to our collective heads and forcing us to read blogs, right? So where's the damage? Sometimes we just like to hear as many different opinions as we can.

But it has damaged the formal culture in the sense that professional critics are less influential than ever before, in the sense that many newspapers and magazines aren't even employing critics any more, and in the sense that the standards of mainstream media criticism have, in some areas, dropped off markedly. Janet Maslin is still writing about books, thank goodness, but where are the Vincent Canbys and Pauline Kaels of today? (And don't even mention David Denby of The New Yorker -- The man is an moron.)

I read a lot less criticism than I used to. In part it's because there's so much of it out there, cancelling itself out, but it's also because most mainstream critics are nothing more than logrollers, crying out "The Best Movie of the Year!" at every opportunity. "Brilliant! Breathtaking! Stunning!" -- oh, now there's a good one. I see "stunning" all the time, and I have to believe that some people must be easily stunned. I don't recall ever being "stunned" by a book, even the ones I love, except maybe when a heavy one falls off of a tall shelf onto my head. I don't always agree with Roger Ebert, but I can usually count on his opinion to be well-informed and well-written. That's more than you can say for most.

When I hopped online and read some of the commentary about Heathers, a picture I wrote about on this blog last week, I had to wonder if some of these people had seen the same movie that I did. They could not even describe it accurately. It is not a movie about teenage suicide, as I read over and over again in one misinformed article after another. It's a movie about bullying. That many can't seem to grasp the basic concept makes me mistrust their judgement in a big way.

Years ago I read a review of The Exorcist that claimed there was a shot in the movie showing Jason Miller's head hitting every step on the way down when he's thrown from the house. I watched for the shot. It isn't in the picture. I could probably name numerous examples, if I wanted to do the research, of critics describing things that don't exist in the films that they write about, things that came out of their own heads..

One good example comes to mind: William K. Everson is one of the best, a man whose work I respect as being carefully thought out and backed up by solid experience and knowledge. But he was writing before the era of VHS and DVD and video on demand, and his otherwise wonderful book The Films of Laurel and Hardy (a must-have item for anyone who treasures that team as I do) does contain errors. He probably hadn't had a chance to review some of these pictures in years and years, with the result that I can go through his book and point out at least five instances in which he misremembers details, attributes individual scenes to the wrong movie, or describes scenes that flat-out never existed.

The thing that got me started on this today was a book review from Time magazine, one that the publisher thought good enough to use as an endorsement on the paperback edition of the book itself: "Then We Came to the End is that rare novel that feels absolutely contemporary, and that rare comedy that feels blisteringly urgent."

There's some danged stinky writing going on in that sentence, and it scores high on the BS-ometer at the same time. Is the word absolutely absolutely necessary? Did the writer feel a need to distinguish between this and, say, a novel that feels only slightly contemporary? And rare? Actually there's a boatload of "absolutely contemporary" novels out there. I can smell them a mile off. I've also seen plenty of urgent comedy in my day. But "blisteringly" urgent? That's a new one. I think I'll stay away. I don't want to have to bandage my fingers after reading a couple of pages.

-- Well, Doug, what did you think of this post?

"An astonishing depiction of teenage suicide!"

"Two thumbs up!" (I won't say what portion of the anatomy.)

"Un-putdownable!" (No, really, I spilled a bottle of crazy glue and now I can't put the book down!)

In this atmosphere, I'm kind of surprised that no one has ever typed: "I had seven orgasms while reading this book, and I wasn't even touching myself!"