Some Lessons Never Get Learned 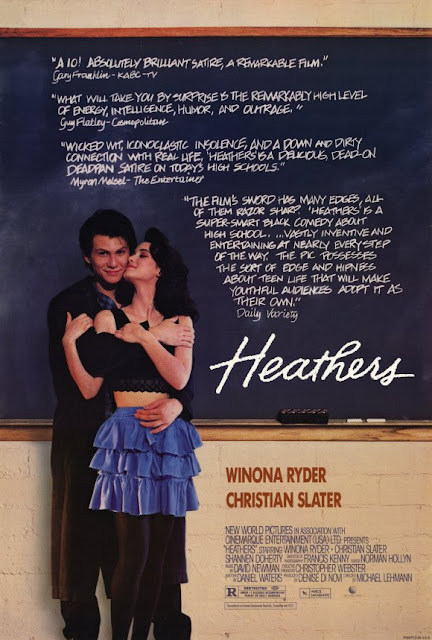 Heathers, the 1989 black comedy about murder and high school, has aged well. The cinema has grown markedly more savage since then, but also, curiously, more provincial and shallow.

Compare Heathers with its modern counterparts, notably the Gossip Girl series (created by Cicely von Ziegesar, an alum of the college where I make my living -- don't blame me!) which portrays unashamedly and with straight faces the shallow lives of the very kind of insufferable kids that Heathers is intent on blowing away. With titles like Because I'm Worth It and Only In Your Dreams, the Gossip Girl series glorifies the sense of superiority and privilege that Heathers quite rightly savages.  Some of those kids should watch Heathers. Nobody deserves to be murdered, but a slap across the face might do them some good.

Heathers is not perfect -- there are individual lines and scenes that hit the floor with a desperate klunk. But taken as a whole it is kind of inspired, and especially today its deeply radical streak is as welcome as fresh Spring air. This is a picture that could not be made today, although the world needs it more than ever. It succeeds in part because it makes you laugh at some appalling things, and then throws cold water on you, asking "Why are you laughing? This isn't funny."

Indeed, for a comedy the subject matter is deeply serious. High school bullying is nothing to laugh about, as the filmmakers are very well aware. Heathers is deeply exploitative in the sense that it takes its audiences back to school and reminds them of how badly this behavior hurts its victims. It preys on your own memories of the despicable people you knew back then, and who made themselves known to you in evil ways. You're not sorry to see Heather #1 and the jocks die. At the same time, the murders are both funny and terrifying. Heathers walks a razor-thin line with great skill.

While we're on the subject, it always amazes me when people are surprised by things like Columbine and other school shootings. I want to say to the parents, Actions have consequences, and your kids are helping to create the stresses that cause these things to happen. You and your kids are, perhaps, not as guilty as the actual shooters, but are conspirators nonetheless, carrying part of the responsibility and the blame.

But kids don't change. I see random acts of cruelty all the time at my workplace, usually on the Digest of Civil Discourse, which is rarely civil or discursive. On the other hand, the atmosphere here is better than it used to be. Instead of just devising a plan of action to take in the event of a shooting (which they have done) the college has been pro-active and banned all fraternities and sororities from the campus. It's made the place much safer and kinder overall.

Still, we produce alums like Cicely von Ziegesar, a real-life Heather whose books, at least on the cultural level, are swinging the pendulum right back into the most dangerous territory of all: youthful arrogance.