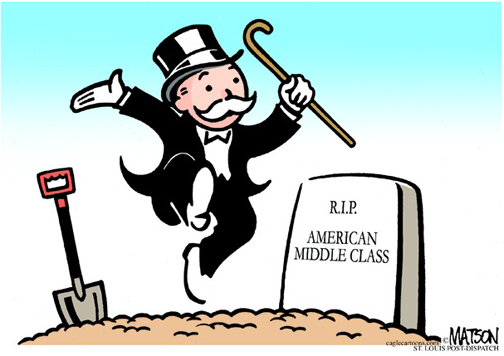 Here's a hypothetical for you:

Your roof is leaking. You hire a guy to fix it for you, and agree upon a price. Say, $1,000. The guy comes, does the work, even fronting the money for materials. He does a good job. Your roof now fixed, he comes to you with a bill in the amount you agreed on.

Do you then say to him: "Sorry, I know we agreed on a thousand dollars, but I'm only going to pay you a buck ninety-eight. Take it or leave it."

No, you don't. Because "dis is America" and we don't renege on our word.

Except we do. We do it all the time, and we're doing it to teachers right now.

Here in Maine, Paul LePage -- our monosyllabic bully of a governor -- has only been in office a month, and already he's trying to reduce pensions for our teachers, including ones who have already retired or are close to it.

These people kept their side of the bargain. They did the job, and expect what they were promised. It is fundamentally evil to come along now after the fact and say, "Sorry, the economy is in trouble and we're not going to pay you what we agreed to.

"Oh, and by the way, we're going to strip you of your right to negotiate, too."

Now, if you want to reduce pension promises for new hires, that's another matter. It's their choice to accept what they are offered, or to go somewhere else. Somewhere where they'll be treated fairly, and with more respect.

Instead, the freshman class of Republican legislators have used their leverage to claim a mandate for their war on women and unions. And they're getting away with it!

What the hell is going on here?

Folks, we've already fought the Class war once. People were broken. People died. Unions have not always been saintly things, but can you imagine what the working world would be like without them? Even those of us who are not union members have benefitted from their efforts.

Do we really have to fight this war all over again?

How does it help the economy to make life harder and more desperate for the working class?

The last thing we need right now is another damn war. But it's going to come to that if the states don't come to their senses and stop backstabbing the people who do us all public service, and to whom we have all incurred obligations.

Email ThisBlogThis!Share to TwitterShare to FacebookShare to Pinterest
Labels: politics