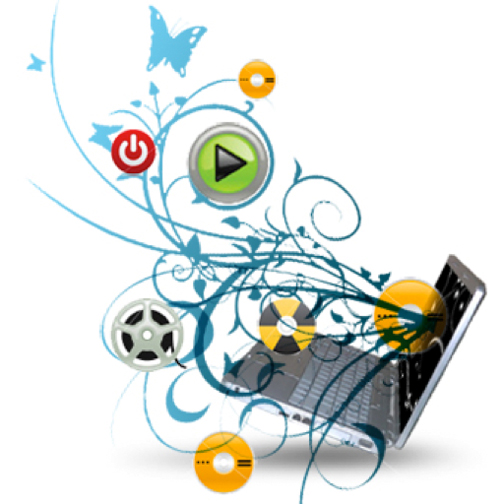 Tonight I started working on the new site in earnest. Until now, everything I'd done had been in the area of just trying to clarify my thoughts, and in researching the software that I would be using to create the thing.

It's deeply frustrating to me that unlike the "old" days, the software doesn't come with manuals anymore. At best, there's access to online documentation and tutorials, but I never knew a tutorial that was worth a damn to me, and the online documentation is so loosely organized that I find it difficult to get the information that I'm looking for.

For instance, Flash now comes as three separate products. Which product would I use to accomplish specific functions? It was hard to get answers even to those basic questions, and the answers that I did find were written in corporate geek jargon, certainly not in English; like an archeologist looking at hieroglyphs I had to puzzle out the meaning of what I was looking at.

Tonight I simply organized some graphics files and started to create new graphics for the site in Illustrator and Photoshop, and it was all the more dismaying to find that even these programs that I formerly considered myself proficient in have changed so much since the versions that I used that even simple tasks required frequent trips to the HELP menu. Very little of the functionality is organized the way that it used to be, especially in Illustrator. The learning curve just got steeper.

But that's OK. I'm going to come out of this with an expanded skill set. I think.

I'd had an idea for the new main page, and all of the reading and research I've done in the past couple of weeks has caused me to realize that I have to scale it back. Not ruling anything out for the future, but I have to start with a simpler design. Once I learn the basics I can modify and build from there.

To put the frosting on the cake, I'm also going to be learning Dreamweaver and Cascading Style Sheets, and tonight I realized that I couldn't start with the home page at all -- it was better for several reasons to begin with some simpler content pages, and then work my way back through the hierarchy to the more complicated and fiddly home page. Baby steps!

In other news. . . maybe getting another step closer to being Done with the move has had some impact on my emotions. Tonight for the first time in a while I could not stop thinking about Mom, and while I was doing the dishes I suddenly found that I couldn't see anything that I was doing because my eyes were full of tears.

Yesterday I had a regressive, anxiety-ridden morning the like of which I hadn't experienced in a long while. I started out all right, but kept on getting more and more panicky and full of dread. It got worse and worse. At one point I even started to hyperventilate. I don't know what brings these things on, but I hate 'em! Thankfully, these kind of mornings are growing fewer, and today I was fine.

So that's all the blah-blah-blah I can muster up for you today, Dear Diary. One foot in front of the other, and maybe I'll get somewhere eventually, to coin a cliche.