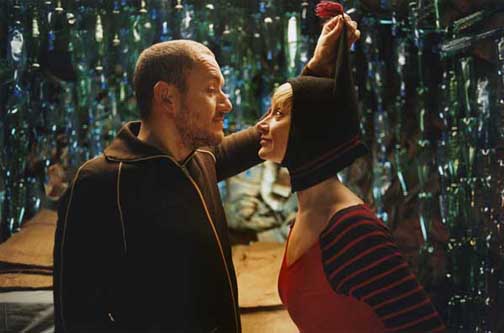 This could be a Long and Winding Post. I have several preambles to amble down.


I had not played the programming game for a long time. DirecTV, the internet and various kinds of new software had taken over my life. This past Friday night I was ready for a break from all that, and it helped that the DVD I'd ordered of Jean-Pierre Juenet's latest film, Micmacs, had arrived from Amazon earlier in the week (damn Amazon and their one-click button! That and a couple of drinks is a costly combination!).


In the old world, Friday night was always movie night, and I always led into the feature with a cartoon, a comedy short, and a serial. So that's what I did; but it had been so long since I'd been through the unwatched DVDs that I didn't know what I had in the pipeline. I finally settled on a 1950's Felix the Cat TV cartoon, Charlie Chaplin's The Immigrant, and chapter one of the 1945 Republic serial, Haunted Harbor, starring Kane Richmond and Kay Aldridge.


I hadn't seen any of these Felix TV toons since I was a little kid, had no memory of any detail other than he used his magic bag a lot to do fanciful things. Now they strike me as so minimalist and so campy as to be almost surreal. The cartoons do have plots, if you can call it that, but the events are disconnected and things Just Happen for no reason at all. Quite realistic, actually. The animation is beyond limited -- the characters all have stock movements that are repeated over and over again. But it's colorful, short and imaginative. A perfect lead-in to the feature presentation.


Of course I'd seen The Immigrant before, although not in years. Without diminishing Chaplin's genius, I prefer Keaton, and here many of the reasons are on display. Chaplin asks for sympathy -- Keaton doesn't. Chaplin is sentimental, Keaton is not. Both comedians treated the world as their playground of invention, but Chaplin was ballet to Keaton's mechanic. The women in Chaplin's films were largely uncomplicated; in Keaton, they can turn on a dime.


The Immigrant is interesting in that it contains only three scenes: The Boat, The Restaurant and The Marriage Bureau.  On the boat, Chaplin does some funny stuff, the girl and her mother are introduced, and Chaplin gets a quick opportunity to play the Hero before we get a brief flash of Charlie's political views. Blink and you'll miss it: yet it caused an uproar in its day; little did the world know that this was just Charlie's first flash of social consciousness.


The Restaurant is by far the more amusing of the two sequences, with Charlie in a real jam, fretting and fussing, working the situation from every possible angle, and finally coming out on top. His jubilance at getting away with his skin intact seems to be the force that carries him and the girl to their brief final scene at the door of the Bureau. It's a good short -- but there was so much better to come.


Haunted Harbor turns out to be one of the better-structured and more plot driven of Republic's later serials, based as it is on an actual novel. Richmond is one of their better leading men, having had a memorable turn as Spy Smasher three years earlier. Here he plays a sea captain implicated in a murder he didn't commit (Republic fans will not need to be told that the actual culprit is Roy Barcroft). On the verge of being taken to the gallows, his friends spring him from jail, steal a schooner and head off in search of the villain. The cliffhanger sequence is really smashing, as Richmond attempts to rescue Kay Aldridge from a swamped vessel during a raging typhoon; of course, before he can do so, the side of a mountain falls in on them.


That's what I like about the Republic serials. They're realistic. No, I'm being serious. Metaphorically, people are having mountains fall on them all the time. Somehow, we climb out of the rubble, dust ourselves off, and get going against those Bad Guys.


Finally, now, I can write about Micmacs. But even that comes with a preamble.


Although two more different men would be hard to find, in one way I can equate Jean-Pierre Juenet with the Canadian novelest Robertson Davies: I love their work. I was privileged enough to "discover" Davies while he was still alive and very much active as a writer. He was the ONE writer that I would buy in hardcover. A new Roberston Davies book was a gift, and a kind of milepost. He was busy right up until his death; I could have gone on reading him forever.


I feel the same way about Juenet's movies. Each one is a gift. Every time a new movie by Juenet comes out (and it doesn't happen every year, or even every other year), it comes home with me.


So I was looking  forward to this.


And I believe that, this one time, I have an observation about Juenet that no other critic has made! But I could be wrong.


I touched on it a while back in the post "A View of Some Views Worth Viewing," when I compared Amelie Poulin to Bugs Bunny. Micmacs makes it even more obvious. Mr. Juenet's chief influence in his art is none other than Chuck Jones -- and Micmacs is a Chuck Jones cartoon come to life!


Deny it if you can, Mr. Juenet! I've got your number!


Its full, original title is Micmacs à tire-larigot, which, if you can believe Wikipedia, translates to the title I used for this post. I don't want to detail the plot other than to say that Bazil, the main character, is another one of Juenet's lost child-people trying to find a shape and direction for his life, and that he ultimately finds help in one of the most unusual (and charming) extended families ever brought to the screen. Yes, this is another movie about the creation of a family, which means that it pushes all my buttons.


Everything that Mr. Juenet has ever made has three main characteristics: the stories are elaborate and many-threaded, the visual style is jubilant, and the storytelling style is cool and antiseptic even when the characters are the opposite.


Micmacs is no exception, but for the first forty-five minutes I felt that, if anything, Juenet's storytelling was even more arcane, detached and antiseptic than usual. Then the coin dropped. In the face of Michel Crémadès as Tiny Pete, one member of that extended family, I saw the animation of Chuck Jones.


From there, my heart melted and I sat back to enjoy the mission.


Juenet frequently uses the same actors, and fans of Amelie will spot some familiar faces here. And what faces they have! Juenet photographs them with love.


Like all of Juenet's movies, I know this one will require repeated viewings, and I look forward to that. Bazil's story is one of Adventure, Romance and self-realization, and he's up against a much badder gang of Elmer Fudds than Bugs Bunny ever had to face. Micmacs is full of color, charm and life, if you can accept the fact that it truly is a 100-minute long cartoon.


I say, let the shenanigans begin!