Which Twin has the Toni? 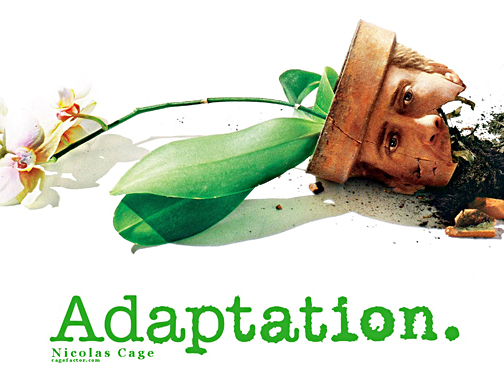 It's hard to be certain if Adaptation is really the anarchistic deconstruction that it wants you to believe it is, or simply just another example of that which it purports to be making fun of.

Either way, it's ultimately a good-natured mindgame of a movie that mines a lot of the same turf as Richard Rush's jubilant  The Stunt Man, albeit through a different lens and with different results.

Charlie Kaufman's Chinese puzzle box of a screenplay attempts to dramatize two things: a real book, written by a real person about another real person (The Orchid Thief, by New Yorker regular Susan Orlean), and his own struggle to write the screenplay based on that book, which flouts every rule of Hollywood screenwriting that he must, somehow, force the book to adapt to.

It's a movie that sent me directly to the internet. What was Susan Orlean's reaction to all of this? It turns out that she was in the loop the whole time, as she would have to have been, but that she had misgivings about the whole thing until she saw it finished for the third time.

That makes sense to me.

It also makes sense to me, although I have not read the book, that she would endorse this as a perversely successful and faithful adaptation of her book, even though it essentially chucks the book out the window -- or, as Orlean more accurately puts it, makes the book a character in the movie adaptation.

Here's the thing: Hollywood is locked into a format, now more so than ever in its its history. As my friend BC points out (again and again and again), the muckety-mucks at the big studios have people who go over the scripts to make certain that Standard Plot Point A happens in Scene One, and so on, and on.

Kaufman was presented with the task of delivering a script that fit the mold, based on a book that was entirely unfilmable in the sense that nothing could be done to make it fit that mold.

So he put himself into the script, created a fictional twin brother for himself, took the one thread that he could use (passion) and projected a fictional relationship between the author and her subject, a real character, whose colorful passion for what he did was the main reason the book got optioned in the first place.

Are you still with me?

Chris Cooper plays John Laroche, the Orchid Thief of the book's title. He does it brilliantly. I've seen Cooper in a number of roles, and this guy really is the cat's meow -- other than a vague sense of familiarity, I never, never recognize him until I see his name in the closing credits. The guy is a chameleon -- and what he's doing here (in tandem with Meryl Streep, playing Susan Orlean herself) involves playing a hyped-up, meta-fictionalized, self-consciously Hollywood-zed caricature  of a real person -- that still evokes the real person so well as to completely blur the line between reality and Hollywood.

Kaufman's screenplay actually turns these real-life people into psychopathic, drug-addicted killers in order to give the movie its big, shocking, action climax. And here's what I'm saying: does this parody and criticize Hollywood's demand that things play out by the numbers (as Kaufman wants us to believe), or is it just a really clever way of giving Hollywood what it wants?

I'm not going to make that call. Like a good magic act, there is a lot of misdirection going on here, especially in the very slow opening scenes -- which turn out to be slow for a reason (and I believe that if Kaufman really got away with anything, he gets away with it in the very first scene of the picture).

Meanwhile, Streep actually made me not hate her for once, and it was good to see Cage demonstrating that there was a reason that he used to amount to something -- we've had precious little evidence of that in recent years.

I hated Spike Jonze's Where the Wild Things Are so much that I couldn't sit through more than about fifteen minutes of the damn thing. But Adaptation is another matter. Its stature varies with the mileage, and depends a lot on what you, the viewer, bring to it. That is a very big point in its favor.

I can see justification for both answers, but I have to give a tip of the hat to any movie that's clever enough to ask the question -- and then not answer it. Oh, yeah, and a movie that manages to make a star out of its own writer? I don't know much about Charlie Kaufman, but in principle I am in favor of that!