When the Apocalypse Comes. . . 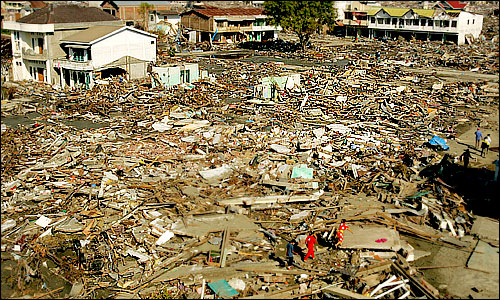 I spent the weekend largely immersed in my own little world, coming up for air just long enough to run some errands, take a walk around the block, and follow the sad events in Japan.

I think of how hard the last few months have been for me, and I know that it's nothing, less than nothing, compared to what's facing those poor people in the years ahead. This morning comes the news that thousands of bodies are washing up on the beaches of Japan's coastal towns, literally a tide of death. Also the news of another explosion in one of their nuclear power plants -- this Big Event is still unfolding, with Who Knows What waiting in the wings.

I lost my mother and my home -- but I landed in a new home in better circumstances, and am steadily getting it together.

In Japan, whole populations were wiped off the face of the earth. Whole towns erased from the map.

And I am fascinated to look at the faces of the survivors. I see very few tears. There is grief, but it seems to be underwritten by strength. Some even manage to smile. It took me months to reach that stage, and mine was a common, garden-variety grief.

No doubt some are still in shock, still in survival mode; no doubt that the tears will come, once they have the time to look around. The devastation is so widespread, and in some areas so complete, that it must be numbing to the sensibilities.

On the Global scale, I have to wonder what's going on here? Haiti, China, Thailand, New Orleans. . . the planet knocked off it's axis, shortening the days. Landslides, tidal waves, hurricanes, eruptions. I'm not even close to being one of those loony "End of Days" theorists, the 2012 crowd and the "Left Behind" bible thumpers who actually want to bring on the apocalypse so that they can get to Heaven in their lifetime, but to me the planet does seem to be tearing itself apart, and doing it at an alarming rate.

If, as Jorge Luis Borges once imagined, the planets were sentient beings, communicating with each other as they circled about in the sea of stars, then I could well understand why the Earth would wish to be rid of the human parasite that has been infesting it for, in the grand scheme of time, the last few days. I'd scratch, too. I could even understand why it might begin to succumb to the illness.

And if I believed in God, it would be easy to imagine the old guy thinking that it was time to do another Sodom & Gomorrah number, on a much grander scale.

But none of that gets me any closer to understanding what's really going on here. That something is going on, I have no doubt.

While making my errands run on Saturday, I passed one of those non-traditional churches that has a display sign out front, and thinks that it needs to regale the public at large with "Wise Sayings." Usually these sayings are more along the lines of the trivial, the trite, and the idiotic. This one, that day, read: "Don't think about the strength of the storm. Think about the strength of your God."

On one level this reminded me of the purpose of religion, and the value of faith, and why even J.R.R. Tolkien depicted loss of faith as a mortal sin. But if you believe in God then, by definition, you have to believe that God created the storm as well, and that he had a reason. The most common reason offered is that God does these things to test us.

What a pernicious, evil-minded son of a bitch! What a foul, sad, pathetic creature that God must be!

That God killed a lot of people last week just to learn that the Japanese are made of Strong Stuff.

When I knew that I would have to move on, I looked at the job of work ahead of me and allowed myself to  despair, not knowing if I could ever get through it all by myself. Now I look at the pictures coming out of Japan, all the rubble, all the wreckage, and am in awe of the ability these folk are demonstrating to keep on putting one foot in front of the other.

It's not just an example to follow. It's the meaning of life.
Posted by Freder at 12:39 PM