The Place Where Anything Can Happen 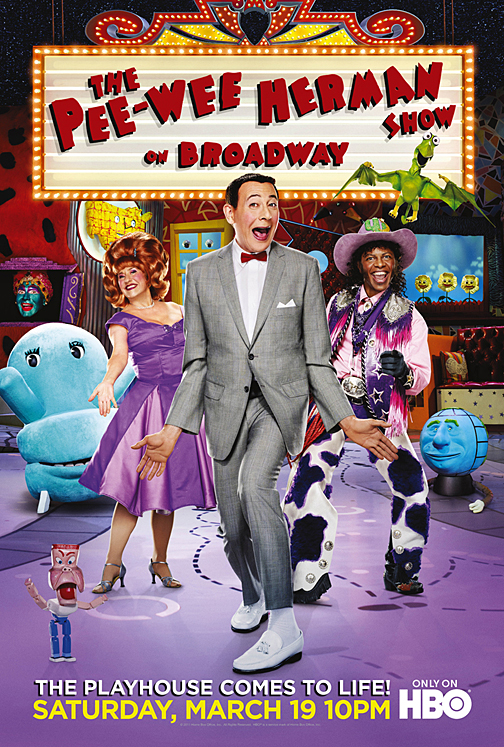 The world is divided into two classes of people: those who don't get or like Paul Ruebens's Pee-Wee Herman, and those who do. I have the perfect solution for all parties: if Pee-Wee isn't your cup of fur, don't watch his show, and leave the rest of us in peace. If you must watch Pee-Wee (say, you're a critic for The New York Daily News), don't come crying to us with comments like "There isn't enough plot!" or "It's like being trapped in a room with a sugared-up four-year-old for ninety minutes!"

Both comments actually miss the point by a wide margin.

Actually, there was plenty of plot, if you were paying attention, in Saturday night's HBO Broadcast of The Pee-Wee Herman Show on Broadway, and no, it's not like being trapped with a sugared-up four-year old, it's like being one and still being grown-up about it.

Not only was there plenty of plot, but there was all the usual layering of subtext and winking pop-culture parody, wrapped in a very sophisticated technical production, performed by a talented cast of true believers who really all seem not to be acting so much as becoming the characters.

From the beginning, Pee-Wee Herman was Paul Ruebens's subversive take on that long-extinct species, the '50s afternoon kid's show. Maybe you had to be around in the day. It wasn't just Captain Kangaroo and Howdy Doody -- every local station worth its salt had an afternoon kid's show that involved specific ingredients: a kid-friendly character host, puppets, colorful sidekicks, an in-studio kid audience, and cartoons.

I actually appeared on the Portland, Maine iteration of that show in the late sixties when I was a practicing Cub Scout. They gave us bags of candy and soda pop, got us all sugared up, let us all say our names on TV, introduced a few cartoons (we didn't get to see them, they were spliced in later). We got a tour of the studio and saw where they filmed the evening news. We all had a grand time.

That kind of show went the way of the dinosaur more years ago than I care to think about. But off and on over the years, its memory has been kept alive -- and satirized, and reinvented, and gloriously undermined -- by Pee-Wee Herman.

It was danged good to see him and all the Playhouse gang again. Understand, Time has taken its physical toll on Pee-Wee and Jambi the Genie and Miss Yvonne just like it's taken its toll on you and me. People said the same thing when William Shatner and the rest of the original Star Trek crew made Star Trek: The Motion Picture -- and that revival was done just a little more than a decade after the original series went off the air.

It's been nearly thirty years since we last were invited into Pee-Wee's Playhouse.

So, what's really remarkable here is not that the gang shows signs of physical wear and tear, but that they can do a marathon, highly physical ninety minute show at the exact same level of energy and enthusiasm that they did all those years ago. Paul Ruebens is pushing sixty, and he can still sell this character like there is no tomorrow. That is a mark of greatness.

The show itself was a mix of the old and the new, very shrewdly and slyly written and performed. Ruebens doesn't dodge any of the questions or concerns we might have had going in, but faces them head-on and makes us believe in Pee-Wee and the Playhouse all over again by sheer force of will.

In addition to the visible cast, a crew of fifteen puppeteers brings the Playhouse and its characters to life in wonderful style. Again, a lot of thought went into this, and most every theatrical trick I can think of was employed to great effect. This was not a hap-hazard or cheaply mounted production done to cash in on the affection of old fans. Rather, a lot of effort went into it to reward us and recreate the Playhouse experience in a vibrant way.

I won't describe the individual gags or reiterate what was done on the stage other than to say that it was Pee-Wee, and it was perfect. The ending is particularly delightful, and involves interaction with the audience, puppetry, music and wish fulfillment. When Pee-Wee sang "I'm the luckiest boy in the world | Much luckier than YOU," I confess my eyes were not dry. It felt genuinely like a personal triumph for Ruebens & Co., one that resonates with the audience.

You get over things, and you fly.

Welcome back, Pee-Wee. Don't stay away so long this time, hear?