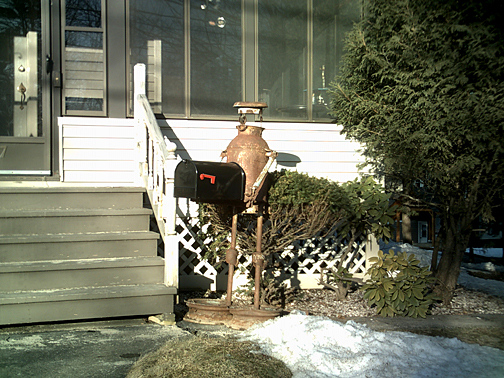 What a long, mixed day this has been!

Thanks to above normal temps all week, the snow had clearly melted enough for me to make the run out to the old house in order to collect the outside things that I didn't want to leave behind. These included the concrete, ornamental garden bench that sat beside the main door, the special bricks that we used to line the edge of the garden, the concrete bird bath, a concrete pillar that one of my mother's folk-art wooden birds sat on in the summer months, a small stone pedestal, a rusty old tractor seat, and all of the elaborately carved blocks and bricks that my family recovered from The House that Was all those decades ago, in Minnesota.

Yup, all the heavy stuff. I wouldn't be surprised if it weighed half a ton, all told. Whatever it weighed, my car never complained through the whole process, though it was riding several inches lower than normal by the time I finished.

There is still the old Jail House that I will have to hire someone to move for me, but other than that, I am done out there.

It was a strange visit. As I drove out the old level of anxiety started to return. I wasn't sure what I would find.

The yard was even more melted and cleared than my yard at home, so I didn't need the shovel that I'd brought along, just in case. I had terribly mixed feelings as I set out to load up the car. On the one hand, I knew the grounds so well that they felt a part of me, and on the other I was an interloper where I no longer belonged. I looked in through the living room window, and then wished that I hadn't. The new owners had changed all the padlocks on the two barns, and added an all-new padlock to the front door.

The heavy lifting warmed me up quickly, and I began stripping off layers. The bench comes apart into three pieces, the largest being the seat, and I was out of breath by the time I'd done wrestling it into the car. The car sank visibly with everything that I added.

As I worked I began looking wistfully at the Mechanical Man. This is a large metal figure welded together out of pipes and car parts and the like. He was built as a mailbox holder, but we never used him that way. He just stood out at the edge of the road. The mailbox was meant to rest on a long metel bar that juts out of his lower abdomen like a gigantic robot erection.

I always liked him, but I figured that I would have to leave him behind. None of the auctioneers apparently wanted him. It seemed that he would stay at the house.

But as I was loading up and looking sideways at him, the coin suddenly dropped. He was built as a mailbox holder! What did I need at the new house? A mailbox holder! My mailbox was currently a dirty, rusty old wastepaper basket with a lid that I inherited from the previous owner. It sat on the top front step. I'd been meaning to upgrade, but how?

Suddenly, I knew that the mechanical man had to come with me. I measured him unscientifically with a fallen branch, and it seemed that he would fit in the car -- although not with the load that was already in it.

I'd been meaning to set out the white-painted rocks in their places along the edge of the driveway, as a final gesture. Instead, I loaded two of them up into my car and took them with me.

I drove home, unloaded the car, set up the bench in its new location near the fire pit in the back yard, decorated a bit with all the bricks, whipped up a quick lunch, and then headed back out to the old house.

This time there was no anxiety. I was really excited about my idea for the mechanical man.

It didn't take long for the excitement to go south. His feet were bigger than I realized. That jutting erection (this old guy is on some pretty serious Viagra, lemme tell ya) was at just the wrong angle for getting him in the car. He was danged heavy, too. I had to "walk" him across the front lawn. The new owners will find some pretty unusual footprints the next time they stop by.

Somehow, with a lot of struggle, I got him into the back seat of the car, only to find that he was much taller than I'd measured and would not fit.

I hadn't come all this way and gone through all this hard work to take no for an answer.

At last I had the brilliant notion that by lowering the back window, I could pull his head through the other side and let it hang out. Alas, I'd forgotten that Chevrolet, in their infinite wisdom, had made the back seat windows so that they only lowered halfway. Because, you know, only children ever ride in the back seat, right?

I looked at it from all the angles and I thought that I could still pull his head through that space.  I'd have to put a coat or something down to protect the glass, but it was worth a shot.

You can see it coming, right?

I was having a little bit of difficulty, not much really, in making the maneuver, when suddenly the window erupted into a million pieces right in my face.

I took it in stride. The old me might have had a fit or broken down. The new me just shrugged, pulled the mechanical man's head and shoulders through the cleared space, got into the car and drove.

I mean, what else was there to do?

When I got home, I unloaded him with some difficulty, and stood him in a corner of my driveway. I grabbed one of the flattened boxes I had on hand and some clear duck tape and "boarded up" the broken window. I drove over to Home Depot, bought myself a mailbox and a couple of screwdrivers, then swung over to the supermarket before heading home.

I was very angry to discover, on opening up my new mailbox, that the manufacturer had not included the nuts and bolts to mount it with. This meant another trip to the hardware store, and I barely made it before they closed at 5:00 PM.

It was a fiddly job, but by about 5:30 my mechanical man no longer looked like an exhibitionist. I got him onto the handcart and wheeled him, mailbox and all around to the front of the house. That's where he is now -- and I took the picture above just to prove it!

I still had a quat tray to change out, quats to feed inside and out, a shower to take, dinner to make (chicken wings and green beans, all done from scratch, and it turned out yummy!). Then bills to get ready for tomorrow's mail, including my final bill on the old house from Central Maine Power (it was a pleasure to be able to walk out my front door and put them in my new mailbox, being held so diligently by my mechanical man), and this blog post to write.

I wanted also to write about the debut of Pee-Wee Herman's recent Broadway show on HBO Saturday night -- but it's after ten, I hurt all over, and am very tired. Moanday is right around the corner. But I made some strides today.
Posted by Freder at 10:21 PM