Flowers for the Dead 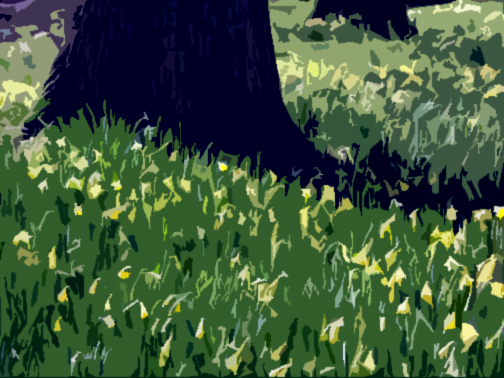 I know that other people are thinking this, because I think it myself sometimes: It's been a year. Why aren't you over this? You should be over this by now.

In just a couple of hours, it will be -- would have been -- my mother's birthday. She was no worse off than she had been for some time. I thought she had a few years still left in her. Instead, she was gone in two weeks.

For the past two mornings, and tonight, this evening, I've had much more than the usual amount of tears.

I can't believe that it's been a year. My perception of time has been even more whacked-out than usual.

A year ago, the largest problem seemed to be my mother's financial troubles and the way that they were tapping me out, too. Every couple of months she'd come crying to me to ask for another thousand dollars. I didn't mind the drain on my finances so much, because I'd sold a piece of art for a lot of money and I could afford it. What I did mind were the waterworks.

She was so dependent on me for everything -- most especially for company -- and it was emotionally and physically exhausting. She used to complain that I stayed in my end of the house too much. But with the job and being responsible for absolutely everything around the house, I desperately needed my Alone Time to recuperate.

Now I know why. My senses were completely overwhelmed. No wonder I kept myself well pickled pretty much 24/7. Life was demanding the very things out of me that were the hardest for a Probable Aspie to give.

Last Spring was a good deal warmer and sunnier than this one. The weekends that began the month of April were sunny and hot. On Saturdays, we made our errands run into town. It took the whole damn day. Mom would walk out to the car, and then at every stop we made, I would pull her wheelchair out of the trunk, set it up, and she'd wheel herself through the various stores. It was a lot of work for her, and she performed like a champ.

Until we got home. Somehow, somewhy, the walk from the car back to the house hit her like a ton of bricks. The sun was high and bright and hot. She would collapse into a chair just short of the door, and I would have to stand over her with an umbrella to shield her from the heat. I'd plead with her to do what she could to get into the house where it was cool and she could rest -- because the umbrella wasn't helping much. A couple of times I ran into the house to get her a glass of ice water.

That walk from the car to the house was a real point of concern. On Friday the fourteenth of April, I was looking ahead to Saturday and worrying about that walk.

We never got that far.

On Friday the fourteenth of April, just a year ago, she walked out of the house for the last time.

That's another post. For now, there's nothing left but to cry and cry.

I spent the bulk of today planting more and more nasturtiums. . . in pots and planters, along the edge of the side back garden. I'm done now. I hope that they come up. Some stupid atavistic monkey stuporstitious part of myself still imagines that I can bring her back if I plant enough nasturtiums.
Posted by Freder at 10:56 PM