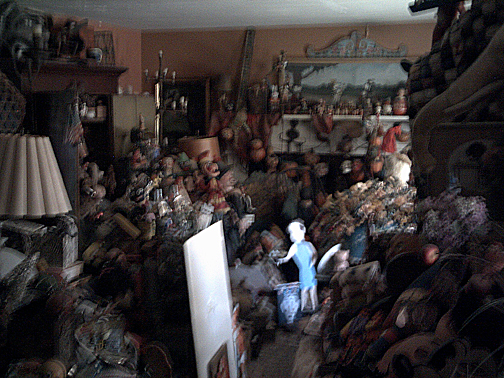 You're looking at a photo of the Living Room in the old house, taken after my mother's death, but before the auctioneers came to pillage, plunder, and destroy.

This is going to seem choppy and disjointed, but it's going somewhere, really, it is.

For the Store, I ordered Temple Grandin's latest book, The Way I See It: A Personal Look at Autism and Asperperger's. I was all over it as soon as I could decently do so (i.e., as soon as I was not on camera).

This may be the next step that my reading will take. Where the reading that I'm doing now is all still in the area of diagnosis and description, this is focused on living, and is overwhelmingly positive.

But for now, I'm still in the realm of basic learning. The Guide, as I've written here before, is eerily descriptive of my life. I keep seeing scenes from my own childhood, and explanations for my behaviour as an adult.

I've written about mornings in the old house before. I've written that I had to get up earlier and earlier in order to beat my mother into the kitchen, so that I could get my morning chores done before she came into the room.

It's true that this was made necessary because the house was so impossibly claustrophobic, so fully packed with Stuff, that it was hard enough to get from the sink to the refrigerator to the front door, hard enough to sponge the floor, when I just had to step over her chair. But when she was sitting in the chair, and I had to climb over her in order to get everything cleaned (sort of) and everyone fed -- well, that was just plain Too Much.

But there was more to it than that. I needed some quiet time, some alone time, some peace and solitude in the morning, in order to gather myself somewhat before I had to start Being Social.

And yes, I was drinking as a coping mechanism then -- I needed to get a couple of shots of vodka and orange juice into my system in order to cope with the assault that was about to come, the Daily Bludgeoning that is life as I know it.

As soon as my mother struggled into the room and sat down, the television came on. Some mornings, this was like a brutal slap across the face. The volume was always too loud, the insipid Morning Shows that she wanted to watch were intolerable to me with their huge casts of Preening Idiots all yammering to each other at the same time about Nothing At All. For some while, the local CBS affiliate ran Guiding Light in the morning, and that was barely tolerable, because it had a discernible storyline; but once Guiding Light was cancelled, morning television was just a daily ramming of nails into my forehead.

For my mother, it was her connection to the outside world, the only connection that she had. For me, it was an almost unbearable onslaught of White Noise. In my mother's world, the television was on 24/7, there was never any quiet, and I coped by retreating to my own end of the house, and by learning to block it all out when I could not escape.

The combined task of doing my morning chores, filtering out the noise of the television, and interacting with her in what I hoped was a meaningful way was, many mornings, more than I could cope with, an emotionally exhausting Chinese Water Torture without the actual cachet of Asian Spies gloating over me while I suffered.

I learned to fear the distant sound of her canes in the front hallway. Clack, clack-clack. Oh, god, I would think, she's coming., Have to hurry up and get this done.

And so I kept getting up earlier and earlier, in order to beat her there and get some of the basic things done, so that I would have a few less things to deal with when she came in.

One morning I absolutely snarled at her: How freakin' early do I have to get up to beat you in here?!

She balanced herself on her crutches, and said, "I didn't know it was a contest."

I was wiping the floor under the cat food dish clean with paper towels. I think that I bowed my head and just sighed. I thought, she doesn't get it, she doesn't understand, but I didn't have the words to say that to her.

The next thing I knew, she was turning in place and struggling back out of the room.

Are you wearing shoes right now? Cross your legs, look at the soles, notice the Heel.

As my mother laboured her way painfully back down the stairs, through the narrow and claustrophobic front hall, to sit on the padded stool in her own room, in front of her own television, most likely resentful, most likely not understanding why her son was "being so mean to her," -- as she said to me several times -- there was the part of me that gathered myself in silence, and sighed, and inwardly said: