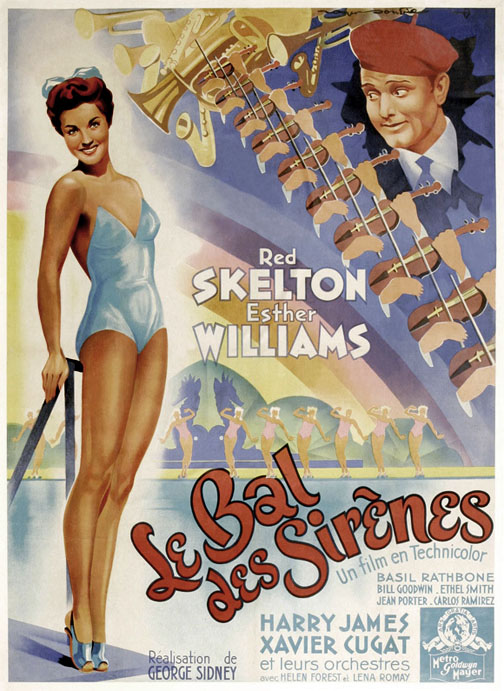 Bathing Beauty is just the sort of movie that my mother and her best friend Joan Betty used to ride the trolly into downtown Minneapolis to see on a Saturday afternoon. In fact, Ester Williams was one of the stars that she remembered fondly. I'd lay you odds that that pair saw this picture on the big screen in its first run.

They would have been sixteen years old, and I can well imagine that this is the kind of picture that a couple of teenaged girls of that period would really enjoy. Hell, I enjoyed it. What's not to enjoy?

It's nothing more or less than a big party of a movie, one of the more successful examples of its genre, with great music and genuine fun and a little bit of awkward romance, and lots and lots of dancing.

Some of the musical numbers are presented in a way that is heavily influenced by Walt Disney and Fantasia. Others go a step further, driven by a jazz heartbeat.

Particularly memorable is Harry James seeming to float over his band, lifted by the riffs of his own trumpet, thanks to early (and really effectively used) blue screen techniques.

In the earliest scenes, Red Skelton really seems like a fish out of water as the Romantic Lead and playing it more or less straight. But once the initial Water Ballet is over (Esther selling this odd duck of an act like there is no tomorrow), it becomes Red's movie, and once again I am moved to type that he must have been the hardest working clown in Hollywood at the time. He comes across as genuinely likable, although it's never far from the surface that he's really Giving His All for it.

The silly plot is not important -- although one wonders how something like six writers need to be credited for something that is so very exactly In The Mold as this thing is -- after all, the college swing comedy is almost a genre unto itself, and the details rarely change. What matters is that this one works. I stomped my feet to the swinging beat of the music, I laughed out loud at the jokes, I thought, "Red is a guy I'd like to pal around with," I thought, "Who is that Swinging middle-aged babe at the organ and how does she make it sing and dance the way she does?" and "Who is that cute little brunette that's stealing so many scenes?" and all in all this is that rarest of Rare Beasts -- a party that I wish I could have attended in person.

I work at a college. So I know what college is like. I can only imagine what College Life was like in 1944, when this picture was made -- but, you know what? I bet that, in spirit, Bathing Beauty is just exactly what it was like.