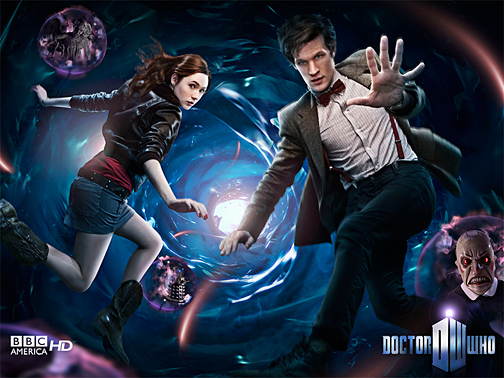 I now pronounce the new Doctor Who pretty danged good.

Well, I call it new because it's new to me -- but as it turns out Matt Smith and the cast, crew and writing staff have been doing this for a whole year already. This is their second season.

I had my worries, in part because Smith looked so very damn young. He is the youngest actor ever to take on the character.

But he's really, really good. His youthful looks work well against the way that he somehow manages to evoke the character's true age (which depends on what part of Episode One you're watching!). He sometimes goes a little far with the manic thing, but it's balanced by a real sense of wisdom, experience and gravity.

I like him much better than what I saw of David Tennant. I also like the scripts better than what I saw of the latter Tennant years: it seemed to me that the people in charge of the show during that run were more interested in getting TORCHWOOD off the ground and that whole agenda than they were in the Doctor. By the end of their run, there were so many supporting characters that the balance had shifted too far.

When Stephen Moffat took over as head writer and Matt Smith took over as the Doctor, a RESET button was hit, and the show took off in a whole new, and inspired, direction.

Moffat is doing things with the show that have never been done before, things that someone really should have thought of sooner. Like, the whole concept is time-travel, right? So why has the Doctor never used time travel within the context of a single story? He's doing it all the time, now, to the extent that we sometimes see him a hundred or more years apart in his own timeline within one episode. He's killed: then he's back. He's met a lady time traveler with whom he clearly has a relationship -- except that even he doesn't know yet what that relationship is, because she's traveling backwards through time while he's traveling forward. They just kissed: it was his first, her last.

In a Christmas special from the end of last season, he hopped into his TARDIS and popped into a crusty old gent's home movies while the guy was watching. Changed his whole past right out from underneath him.

His current lady traveling companion is someone that he first met when she was a child. She grew up thinking he was a dream: then he came back. By that single move, Moffat has cast the whole series as a fairy tale.

Sometimes the talk, in the manner of most modern teevee shows, comes at too fast and furious a pace for me to follow. This is just one reason why I watch the reruns the following week. I'm able to pick up a lot that I missed the first time 'round. And there's a lot to miss: the scripts are dense and shrewd.

One way or another, I'm definitely going back in time myself, to check out Matt Smith's first season on the show. But not right away. For now, I'm good with my weekly Saturday night dose of the Doctor. Like all good things, this season won't last forever.

Email ThisBlogThis!Share to TwitterShare to FacebookShare to Pinterest
Labels: Doctor Who, television