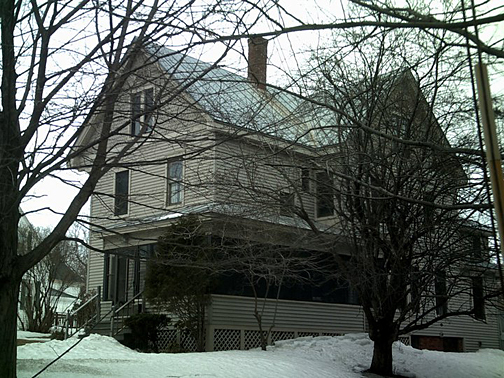 Blogger's recent crash has coincided with a couple of milestones for me. It may take a couple of longish posts to catch up.

Plus, I just had a bad spell of tears. It's hard to organize my thoughts.

Last night I was so full of clarity. Tonight, not so much.

This evening after work, I was staring into the flower bed to see what was what when a couple of young boys went by on their bicycles. I wasn't paying them any mind. The youngest one actually called out, "Good evening, sir!" and I turned and smiled and said hi. The older one said, "I like your mailbox!" -- meaning my Mechanical Man. I thanked him, and then they were gone.

Last night, some paper lanterns that I ordered arrived, and I wasted no time in hanging them along my front porch. I could hardly wait until dark to turn them on and see how they looked.

When darkness came, I was so happy with the effect that I wanted to see what it looked like from the outside. I put my shoes on, walked around the block, stood in the dark and admired my house.

Then I realized that this was exactly the same thing that I did all though the sad summer of last year.

The old house had been irrevocably changed by the loss of my mother. I used to take a drink out into the yard, sit at the garden table in the dark with all the lights on inside the house, and look in at the world that was.

Last night I stood in my yard outside the new house, and looked in on the world that is.

I realized that, although there is still some unpacking and work to do, it doesn't really amount to much compared to what's behind me, and it doesn't have to be a priority anymore.

I realized that, if life is divided into chapters like a novel, and if the last chapter of my life was titled "Transition" -- that chapter has drawn to a close.

I'm no longer in transition. I'm here. And everything that happens from here on in is, trite as this sounds even to me, a lot like my nasturtiums.

The seed's been planted. Now I just have to hope that something will come up.

Email ThisBlogThis!Share to TwitterShare to FacebookShare to Pinterest
Labels: moving, nasturtiums, past things, starting over, The New Haus